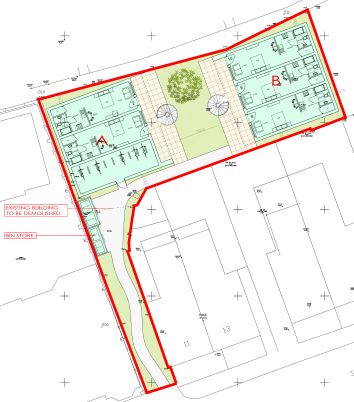 Bournemouth Borough Council: Pure Town Planning are delighted to announce another successful appeal win for a 15-unit residential redevelopment on Southcote Road in Bournemouth. The site is currently occupied by a large-scale commercial premises which has been vacant for some time.

The site is bound on all sides by a mix of flatted development, two storey dwellings and also the six-storey student complex on Holdenhurst Road. Given its residential context and close proximity to Bournemouth Town Centre, an application was submitted in August 2015 to demolish the commercial building and erect 2 x 3 storey blocks of 15 flats in total. This proposal was refused by Bournemouth Borough Council in October 2015 on grounds of the siting, design, scale and mass being overly dominant and adversely affecting the residential amenity of neighbouring properties, as well as the impact on living conditions of the respective 3 storey buildings themselves.

PTP were subsequently instructed to challenge the decision at appeal. Following this appeal submission the Inspector assessed the supporting documentation and considered that the proposal would not harm the character of the area, nor would the living conditions of the units be unacceptable by way of lack of privacy or overlooking. The relationship to neighbouring development on all sides was also deemed acceptable and not creating any significant impact. Lastly, given the site’s highly sustainable location to the eastern edge of the town centre, the Inspector raised no objection to the zero car parking allocation proposed and allowed the appeal. Naturally, this appeal decision was very welcomed news to both the client and architects Anders Roberts Cheer, who worked in conjunction with PTP in securing the all-important planning permission on Southcote Road.

If you have recently had planning permission refused and are considering what to do next, why not contact Pure Town Planning on 01202 585524 or email us at info@puretownplanning.co.uk for an assessment of your chances of success on appeal.