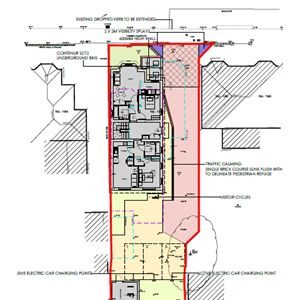 BCP Council (Poole area): Chris Miell is thrilled to announce that he has secured planning permission for a block of six flats on Bournemouth Road, Poole.

The site is occupied by a detached dwelling with a spacious plot situated near to junction of Bournemouth Road and Hardy Road. The approved development, which was designed by Anders Roberts Cheer, grants planning permission for the demolition of the existing dwelling and the erection of six flats in a sustainable location close to local services and amenities.

The application followed a previously refused application at the site, which sought planning permission for the erection of ten flats over two separate blocks. In determining the application, the Council expressed concerns about the massing and depth of the frontage block, the introduction of backland development at the site, the impact of the development upon the living conditions of neighbouring occupiers and flood risk.

Prior to submission of the revised application, Chris reviewed the Council’s decision and put forward a planning strategy to our client, Amirez Developments, which sought to overcome the Council’s concerns. He advised that removing the backland block would overcome the concerns relating to flood risk and neighbouring amenity, whilst the massing and depth of the frontage block could be justified due to the recent findings of an Inspector who determined an appeal on a nearby site. Whilst the appeal was dismissed, the Inspector made clear that three storey flatted blocks were acceptable in this locality.

As part of the application, we prepared a thorough supporting design, access and planning statement, which set out the merits of the proposal in a clear and concise manner, showing to the LPA that the flatted block would not be out of character or harmful to the existing streetscene. As part of the statement, we undertook an assessment of other flatted developments along Bournemouth Road, which informed the local distinctiveness of the area.

The application was duly approved by the Planning Officer who concluded within her report that “The proposed building will not project beyond the existing front building line and will be in line with the front building line of neighbouring dwellings. The ridge height will sit considerably higher than that of the existing building, however it will match that of No.188 & 190. The proposal will also be of very similar design to that of No.188 & 190, with bay windows to the front. Given the above, the proposal is unlikely to appear unduly prominent from the streetscene.”

If you have a parcel of land or an existing property with development potential and would like to pursue a residential development, then why not call Pure Town Planning on 01202 585524 or email info@puretownplanning.co.uk for an initial consultation on how we can help you.