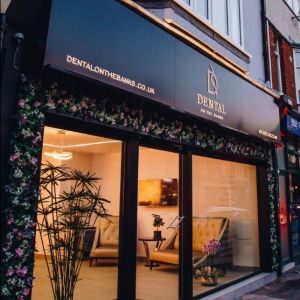 BCP Council (Poole): Matt Annen, is pleased to have secured planning permission for alterations, extensions and formation of a first floor rear extension to an exsiting dental surgery. The scheme which was designed by Now Architecture in combination with the KTM Design and the client (Dental on the Banks) delivers, two additional treatment rooms, a waiting room, wc, office and laboratory.

The proposal was deemed to enhance and expand the current provision of services, providing an important service to the community and contributing to the vitality and viability of the local centre, it was considered early on in the process that the principle of the development was acceptable. The proposed two-storey extension was modern in design, having a cantilevered overhang at first floor level, with asymmetrical pitched roof and finished in white render. The urban design officer felt that the proposal, being utilitarian and contemporary in design, would contribute to the surrounding character and appearance of the area, providing a visual break between the original building and its secondary frontage.

A previous scheme on site was refused for a shortfall of parking and whilst this revised scheme was marginally reduced initially the scheme again received an objection from the highways officer. Matt made representations and a strong rebuttal to the Head of Transportation who after some deliberation advised that because there was a public car park situated within walking distance of the site whcih was there to support the vitality of the commercial units along Haven Road and this car park had capacity to cover such a shortfall that this current scheme would result in, on balance they felt the scheme could be supported. So the highways team did a ‘U’ turn (excuse the pun!) which enabled this revised scheme to proceed to a successful conclusion.

If you have a commercial premises and you are wondering what opportunities are available for expanding the business why not contact Pure Town Planning to discuss what might be achievable?