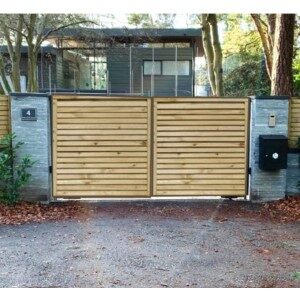 BCP Council (Poole): Jess Glover is delighted to announce that she has recently won an appeal against BCP Council for the variation of a planning condition to allow the cladding of existing gates to match the existing timber fenced boundary at a house in the Branksome Park Conservation Area.

The site is occupied by a substantial dwelling which was granted permission in 2016, however an application which was approved in 2019 sought to vary the condition of the 2016 application to include open metal gates with horizontal bars. These gates were not considered to provide the level of privacy required by the occupants and therefore sought planning permission for solid gates to match the existing timber fence.

The planning application was refused as the LPA considered the solid appearance of the gates would prevent glimpses through to the property which would result in less than substantial harm to the conservation area.

As part of our appeal we prepared a comprehensive appeal statement setting out our justification for the scheme, where we provided a comprehensive character analysis of surrounding solid wooden gates in the conservation area and demonstrated that the solid wooden appearance of the proposed gates would reflect the character and appearance of the streetscene and Branksome Park Conservation Area.

The Inspector agreed that the proposal would significantly soften the appearance of the gates when seen from the road. The Inspector also concluded that “They would also match the height and appearance of the fence that runs along the boundary on both sides of both sets of gates, and which has already been approved by the Council. The gates would not be “open in design”, as sought by Code 3 of the CACA. However, I noted on my site visit that glimpses of the house on the appeal site can be gained from Mornish Road, over the top of the gates.”

The client was delighted with the appeal win. If you have recently received a refusal and would like to know whether it is worth appealing then why not call Pure Town Planning on 01202 585524 or email info@puretownplanning.co.uk for to find out if we can help you.