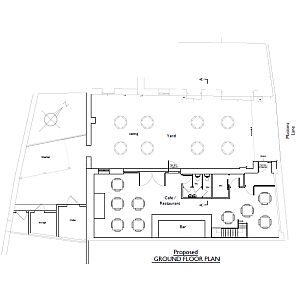 Dorset Council (North Dorset area): Jess is excited to announce she has recently obtained planning permission for the change of use of the existing retail unit to a Cafe/Restaurant, change of use of outdoor area for customer seating associated with café/restaurant and the retrospective erection of store and timber shelter at Muston’s Lane, Shaftesbury. The site is within the Shaftesbury Conservation Area.

The applicant approached Pure Town Planning as Dorset Council’s enforcement team had informed them that the property was not lawfully permitted to operate as a café and drinking venue and therefore they sought our professional view on how they could continue to operate the business at the site, which provided a significant hub for the local community. Furthermore, the LPA required the removal of the currently unauthorised structures on the site.

We advised that as there were residential uses surrounding the premises, it was unlikely that the LPA would support the use of the site as a drinking establishment due to the potential for noise and disturbance. However, when the new Use Classes Order came into effect in September 2020, this permitted greater flexibility by introducing a new use class – Use Class E. Use Class E encompasses retail uses but also café/restaurants and a range of other uses. As such the use of the site as a café/restaurant would be permitted development as it is in the same use class.

A Lawful Development Certificate was not considered the appropriate route in this instance as the existing external structures needed to be regularised and also the use of the yard was not established as being in a Use Class E. As such, full planning permission was sought for the application.

The plans were produced by Alan J Young Limited.

In support of the application, we prepared a comprehensive planning statement which demonstrated that the change of use was in fact permitted development and the retrospective structures provided a fundamental use to support the business and were not harmful to the character and appearance of the conservation area.

Upon considering the application and supporting documents, the LPA were initially reluctant to allow the café/restaurant to operate after 6pm Monday-Sunday, however we argued that this would be economically unviable for the business and managed to negotiate a closing time of 11pm. The LPA also initially restricted the use of the yard to patrons until 6pm due to noise concerns, however we managed to negotiate that a temporary condition was attached to the decision so that the premises could use the yard area until 9pm for a temporary period until June 2022. At this stage, the impact of the yard use on neighbouring amenity would be reviewed with the option to apply to extend the condition to allow the permanent use of the yard after 6pm.

The LPA also required the removal of the external smoking shelter as this would not be typically found at a café/restaurant, however we amended the plans to show the area as an outdoor covered table which the LPA found to be acceptable.

Additionally, the LPA initially sought to prevent any amplified music being played internally in the café/restaurant after 9pm, however we successfully managed to negotiate with the Officer to allow ambient music to be played until close (11pm).

Overall, it was a complex application, with the LPA presenting many hurdles to jump over, however we managed to negotiate a positive outcome and the client was over the moon that they would be able to continue to operate at the site, and they have re-branded and are excited to open in July 2021!

If you have a commercial premises and are experiencing enforcement issues, then why not call Pure Town Planning on 01202 585524 or email info@puretownplanning.co.uk to find out how we can help you.