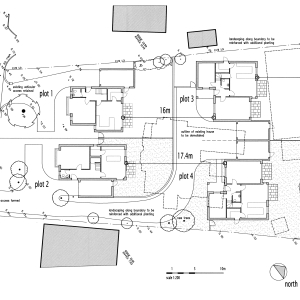 BCP Council (Christchurch area): Jess Glover is ecstatic to announce that she has recently won a planning appeal to secure planning permission for the demolition of the existing chalet bungalow and erection of 4 detached dwellings in Mudeford, Christchurch. The plans were provided by Robert Rodway Design & Architecture.

The Council gave four reasons for refusal of the application, namely: harm to character and appearance; cramped form of development with limited amenity and privacy; noise and disturbance from increased vehicular movements; and harm to the adjacent conservation area. Each of these reasons for refusal were overturned on appeal

The Planning Inspector agreed with our standpoint that the two dwellings along the frontage would not appear at odds with neighbouring built form and the two chalet bungalows at the rear would only be visible in limited views from the public realm.

Furthermore, contrary to the Council’s view, the Inspector was satisfied that the development would not appear incongruous or particularly cramped or cluttered in relation to surrounding built form. The Inspector concluded that as a result of the proposed design ‘combined with limited views of the development from the CA, the appeal proposal would also preserve the character and appearance of the Stanpit and Fishermans Bank CA and its setting.’

With regard to noise and disturbance, the Inspector considered the number of vehicle movements ‘would not be significant given the limited scale of the development and in relation to existing activity in the built-up surroundings’.

Additionally, the Inspector stated that there were adequate distances between dwellings to maintain neighbouring amenity and privacy. Although there would be some mutual overlooking as a result of the development, the Inspector considered that this relationship is not unusual in the surrounding residential area.

As part of the appeal we prepared a robust appeal statement which thoroughly addressed each of the points raised by the Council in their Case Officer’s Report and justified the merits of the scheme in light of local and national policy , whilst making it clear to the Inspector that the proposed dwellings would not harm the character of the area or adjacent Conservation Area.

The clients were over-the-moon with the decision and are eager to progress with developing the site.

If you are working on a residential development and are looking for a firm who will work tirelessly to steer your development through the planning process and secure that all-important planning permission, then why not give us a call on 01202 585524 or send us an email to info@puretownplanning.co.uk for a FREE 30 minute consultation.