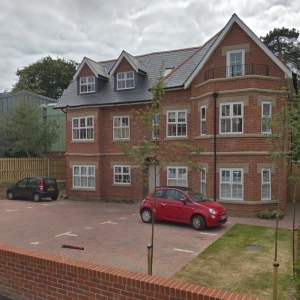 BCP Council (formerly Bournemouth):  Darryl Howells has secured a successful appeal against a decision of the Council to ‘refuse’ an application to vary drawings numbers to allow for alternative bin provision for a flatted development in a conservation area.   The client, Juno Developments originally received planning permission for a block of 8 flats in the centre of Bournemouth, however in those approved plans, the planning officer stated only an internal bin store would be permitted to safeguard visual amenities and prevent harm to the Conservation Area.

Having discussed the situation with the client, Darryl’s professional opinion was “what a load of rubbish”… so the client instructed him  to seek alternative bin storage so the area of the approved integral bin could be reused for habitable accommodation as an extra bedroom to a ground floor flat.

The Inspector having heard the planning arguments determined that an internal bin store would “have a significantly harmful effect on the living conditions for the occupiers of Flat 2. This would be due to a combination of (i) noise and disturbance from residents depositing their bags of rubbish and when the bags were collected by the appointed operator for their disposal; (ii) the likely dirt and dust that would affect the windows of the flat; (iii) the loss of privacy because of the visits of other residents and the operator, and (iv) the potential for unpleasant odours to permeate the flat”.

It is safe to say the Inspector ‘rubbished’ the Council’s decision and allowed the scheme.

From the outset, Darryl ‘smelt a rat’ that the Council’s position was fundamentally wrong.  Now at Pure Town Planning we very much enjoy getting those planning permissions of the clients, but now Darryl has the T-shirt saying out loud “BIN there, done that!”