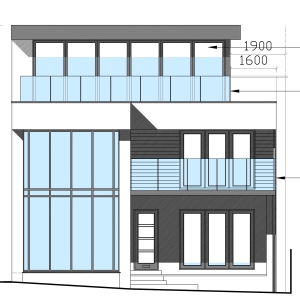 BCP Council (former Borough of Poole): Jess is delighted to announce that she has recently won an appeal against BCP Council for extensions and alterations with larger front balcony at second floor level to a new dwelling in Sandbanks, Poole.

The appeal site is a high-quality three storey contemporary dwelling with cream render and anthracite grey stone cladding, floor to ceiling glazing and glazed front balconies under a flat roof. An extant permission permitted a front balcony on the upper floor, however this appeal sought to extend the balcony forwards by 1.8m to provide an enlarged amenity space for occupants and maximise views across Poole Harbour.

The LPA refused the application as it was considered by officers that the enlarged balcony would harm the character of the area through additional “domestic paraphernalia” and overlooking. In support of the scheme we provided a comprehensive appeal statement which justified that the enlarged balcony would not increase the prominence of the second floor balcony feature and would not give rise to further perceived overlooking than is already present on the site, thus preserving neighbouring amenity.

Only three days after the Inspector’s site visit we received the appeal decision and it was allowed. The Inspector agreed with our assessment and concluded that ‘the proposed balcony extension and associated potential for domestic paraphernalia would not have a detrimental effect on the character and appearance of the host building or the street scene’ nor would it ‘have a detrimental effect on the living conditions of the occupiers of 37 Panorama Road with particular regard to overlooking’.

The client was very pleased with the appeal win and can’t wait to enjoy their enlarged balcony. If you have recently received a refusal and would like to know whether it is worth appealing then why not call Pure Town Planning on 01202 585524 or email info@puretownplanning.co.uk for a FREE 30 minute consultation on how we can help you.