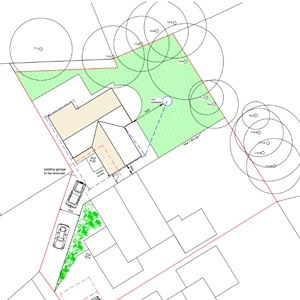 The original planning permission (also secured by Darryl) was described as “demolish existing garage and erect a detached dwelling”.  Following the issue of the decision, the applicant proceeded to demolish the garage but did not get written confirmation beforehand from the LPA confirming the scheme to be a self-build.  The benefit of obtaining a self-build certificate is the exemption from the Community Infrastructure Levy (CIL) charge – which in this case was circa £40,000.

CIL self build exemptions MUST be applied for before development commences. In this case as the exemption had not been sought before demolition, the Council considered that the full CIL charge was payable. The client reverted to Darryl asking for help. In the first instance Darryl contacted the LPA and explained to them that, as none of the pre-commencement conditions had been discharged and that the applicant was within her right to demolish her garage without planning permission, the applicant had not actually commenced development as granted by the planning permission.

Darryl then applied for a fresh planning permission to “erect a new dwelling”.  Given that planning permission had been approved beforehand and there had been no material change of planning policy, the second scheme was approved quickly.  Following the approval, Darryl has now secured confirmation in writing from the LPA that the second scheme is a self-build so the client will be charged zero CIL when the new house is commenced in early 2020.

If you find yourself in a CIL predicament, then please contact a planning consultant from Pure Town Planning who will be able to advise of any potential solutions to reduce that liability to a lower figure or even zero in some case.