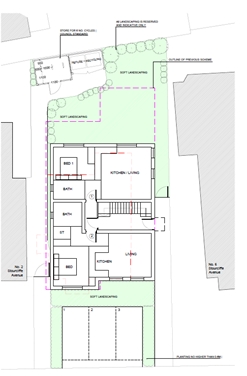 Bournemouth Borough Council: Pure Town Planning are delighted to announce that, in conjunction with DMWA Architects, we have recently secured planning permission for the demolition of an existing property and the erection of a three storey block of 5 flats in Stourcliffe Avenue in the Southbourne area of Bournemouth.

The proposal, which originally sought consent for 6 units, was initially considered to be unacceptable by the Bournemouth Borough Council planners who concluded that the scheme constituted an overdevelopment of the site and would be harmful to neighbouring amenity. Before the application was recommended for refusal, Chris spoke with the case officer and expressed his opinion that a mutually agreeable development could be achieved at the site and amended plans could be provided to overcome the LPA’s initial concerns. The case officer agreed and offered an extension of time to submit a revised scheme.

Over the coming weeks we negotiated tirelessly with the case officer and after the submission of several sets of revised plans, which resulted in the reduction of the overall size of the built form and general improvements to the landscaping and parking arrangements, the application was recommended for approval following re-consultation with local residents and other relevant stakeholders.

Notwithstanding the officer support, the application was brought before the Council’s Planning Board due to third party representations against the development. At the Planning Board meeting, we spoke in support of the proposal setting out in a clear and concise manner the benefits of the proposal and how it complied with the local and national planning policies. Following a short debate, the board members agreed with their officer’s recommendation and voted to grant planning permission with a majority of 9-1.

As evident in this case, here at Pure Town Planning we work tirelessly from start to finish to make it happen for our clients. If you are working on a residential development and are looking for a firm to steer your development through the planning process, then why not give us a call or send us an email to info@puretownplanning.co.uk.