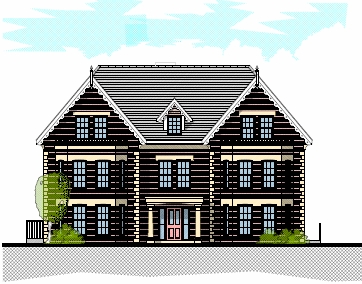 Bournemouth Borough Council: Pure Town Planning are delighted to announce that we have just secured planning permission for the demolition of an existing building and the erection of a 3/5 storey building containing  10 flats in Boscombe Spa, Bournemouth.

The application site comprised an existing detached  2/3 storey period property. The site fell within the designated Boscombe Spa Conservation Area and backed onto Boscombe Gardens which leads down to the seafront. The existing building had been significantly altered and extended, including two unsympathetic extensions to the front and side elevations. During pre-application discussions in 2014 the Council accepted the fact the existing building made only a neutral contribution to the character and appearance of the Conservation Area. Whilst the scale and basic form of the building contributed to the Conservation Area the original architectural integrity of the building had been compromised to the extent there was little merit in retaining the existing building. Historically the building operated as a hotel however its trading as a bona fide hotel ceased many years ago. In more recent times the property had formed an ancillary part of a neighbouring hotel and had been used for conferencing accommodation.

The Head of Tourism was consulted and considered that the loss of the former hotel use on the site was acceptable providing adequate planning gain is achieved. The site had not traded as tourist accommodation for many years and in this instance the loss was justified by the reinvestment proposed to a nearby hotel building (which involved retaining and refurbishing all of the timber windows). The mitigation works which were proposed as part of the application were deemed to not only enhance the appeal of the nearby hotel but also make a positive contribution to the character and appearance of the Conservation Area.

In terms of the new building the scheme was designed by local architects Anders Roberts Cheer. The design of the front and side elevations drew from a traditional palette and incorporated many period features including projecting bay windows, quoins and projecting gables with deep recesses. The rear elevation was designed deliberately to be more contemporary with balconies and extensive glazing to reflect its more unique position and relationship with Boscombe Gardens and the intermittent sea views that will be afforded from this elevation. Future residents of the scheme will enjoy decent sized accommodation with 6 of the 10 flats having dual aspects both front and rear. All of the flats benefit from private balconies to the rear elevation affording views across Boscombe Chine Gardens towards the west and the sea.

The Urban Design Officer initially raised several concerns in relation to the proposed design regarding the proportions of the elevations and articulation of the side and roof. To try and alleviate some of these concerns we amended the plans to show deeper recesses to the gables, enhanced splays to the eaves and introduced quoins to the corners of the building. The planning officer considered that these were positive amendments that will only serve to help assimilate the building into the street scene more harmoniously. Planning Permission was approved under delegated powers last week.

Here at Pure Town Planning, we like nothing more than securing our clients planning approvals. If you are thinking of pursuing a housing/flatted development and are looking for a local firm of town planners to fight your corner and secure planning permission for your scheme, then why not give us a call or send us an email to info@puretownplanning.co.uk.