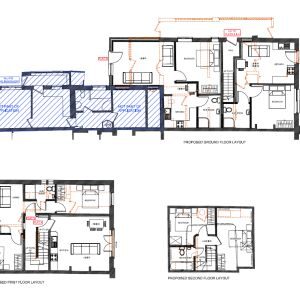 BCP Council (Poole):  Darryl Howells has secured planning permission for the conversion of a building containing 2 x two-bedroom flats into 2 x two-bedroom flats and 2 x one-bedroom flats (so from two to four units) with no car parking.  The client had previously instructed Darryl to apply for the scheme based on the drawings designed by LMA Architects, but the Local Planning Authority (LPA) refused the application on the grounds of lack of car parking, despite the scheme being within 3 minutes of the town centre, bus and train stations and being on a high frequency public transport route.  Following that decision, the client instructed Darryl to appeal the decision and make a full application of award of costs.

Whilst being at appeal, the LPA indicated that the Parking & Highway Layout SPD in Poole was about to be replaced with a new document for the whole Council, namely the Car Parking SPD which essentially reduced car parking need in particular areas across BCP to zero car parking.  In the knowledge of the impending adoption, Darryl persuaded the applicant to reapply for planning permission for exactly the same scheme then at appeal, … which has now been approved without any delay or concerns as the scheme was compliant with adopted planning policies.

The appeal has not been withdrawn we are of the professional opinion that the merits of scheme was actually supported by old SPD but clearly now as revised scheme has been approved by the LPA, there are no grounds to refuse the appeal scheme so this agent is hopeful that the appeal will be allowed along with the application for award of costs.

Sometimes when planning policies change, doing so would support an application which had been previously refused, hence now leading to an approval.  If you have received a refusal of planning permission and want to know (a) what are the chances at appeal; (b) can I make a revised application using stronger arguments or policy interpretation; or both, then please contact one of the Pure Town Planning consultants to discuss.