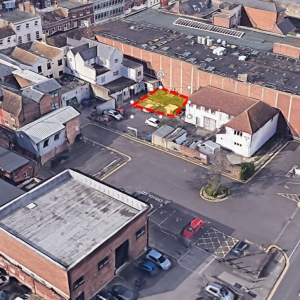 BCP Council (Poole):  Darryl Howells has won an appeal against the decision of the BCP Council to erect a three-storey block of 9 flats, to be positioned on a site located between buildings fronting the High Street and Lagland Road in Poole town centre.

The context of the site was within the Town Centre Heritage Conservation Area surrounded by Listed Buildings and locally listed buildings.  The scheme designed by Jon Harrison of Harriplan sought to position itself in a gap between built form of 2 and 3 storeys, and to the side of a large blank side wall of the adjoining bank.

In allowing the appeal, the Inspector concluded that the proposed three-storey, flat roof building would not harm the setting of Listed Buildings and due to the gap to the nearest designated heritage asset then the scheme would have no effect on their setting.

In developing a vacant piece of land, and screening the bland side wall of the bank, the Inspector decided this would be a visual benefit.  The Inspector noted that the height would be slightly taller than the bank building, and of a similar height to the gable of the adjacent building. As the area is characterised by buildings which range to a comparable height to that proposed, the Inspector found that the proposal would not appear dominant or overly prominent in this location as a result of the overall height.

In conclusion, based on Darryl’s convincing arguments the Inspector concluded that the scheme would not harm the setting of listed or locally listed buildings, or the character of the Conservation Area. The scale of the proposal was found to be suitable s its location and the proposal would also provide new dwellings in a sustainable location, making efficient use of this site, which is a significant benefit.

If you have received a negative response or decision to your proposed development and you would like options to overcome an objection, then please contact Pure Town Planning to speak to one of our experienced consultants.