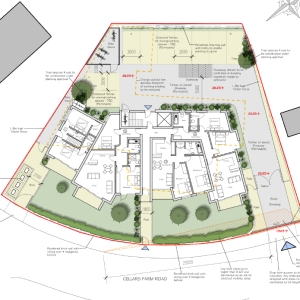 BCP Council (Bournemouth):  Full planning permission has been secured by Matt Annen, a director of Pure Town Planning for a new scheme of flats in Southbourne. The scheme was designed by local firm; LMA Architects for our developer client Caleb Development. The proposal is for the demolition of a former care home and the erection of a three storey contemporary building (albeit with a traditional form) comprising nine flats with associated car parking.

This fantastic consent is the culmination of almost a year and a half of work. Matt first visited the site in October 2018 and a pre-application query for an ultra contemporary scheme of 10 flats was submitted in December 2018. The pre-application response indicated that whilst not a listed building, nor in a conservation area nor on the Council’s ‘Local List’, the appointed officer deemed that the existing building was a ‘non-designated heritage asset’ and therefore would object to it’s loss.

Subsequently an application was submitted in May 2019 and was finally approved earlier this month. So the application process which should have taken two months actually took 10 months to be determined. Matt was in regular contact with the planning officer and their consultees, but the delay was partly due to the scheme going through a number of revisions in response to comments received. Also the officer had multifaceted issues to consider on this proposal:

Here at Pure Town Planning, we like nothing more than securing our clients planning approvals – and as can be seen above, we go the extra mile to achieve these with robust planning strategies, comprehensive submission packages, followed by pro-active negotiation with officers – working with the decision makers to achieve their positive recommendation.

If you are thinking of pursuing a housing/flatted development and are looking for a local firm of Chartered Town Planners to fight your corner and secure planning permission for your scheme, then why not give us a call (using our mobiles for the time being – because of Coronavirus we are all working from home) or send us an email to info@puretownplanning.co.uk.