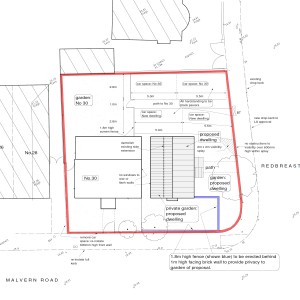 BCP Council (Bournemouth): Darryl Howells, a director of Pure Town Planning is very pleased to have secured planning permission for the erection of a dwelling, in Moordown, Bournemouth.  The plans were drawn up by Jon Harrison of Harriplan based in Bournemouth.

Darryl first met the client at a wedding of a relative, and after being recommended by a fellow guest, he was soon instructed to handle a planning application for the erection of a new house.  Previously the applicant had sought consent for a different dwelling which had been refused on design, layout, highway danger, harm to neighbours and adverse impact to a non-designated heritage asset.

Once instructed, Darryl worked pro-actively with the architect to create a scheme that respected the pattern of development in both Malvern Road and Redbreast Road (as the site is positioned on the traffic junction) and offered adequate amenity space to the occupiers, secured 2 on site car parking spaces and improved the relationship to neighbouring occupiers.

Darryl argued that whilst the officer may have identified it as an asset, its listing in the Council’s list of locally important sites or buildings was missing.  Furthermore, Darryl explained that the historical context of the former cottage had significantly diminished due to surrounding development, and that the buildings on the site could be demolished without any permission needed from the Local Planning Authority.  The planning officer pro-actively agreed with Darryl’s position and did not support the heritage officer’s objection, this time around.

Darryl was able to demonstrate to the planning officer that there was adequate amenity space for the existing and intended occupiers as the Council lacks any adopted standards for such provision.  At the suggestion of the architect the extension to the existing house was omitted from the scheme so overcame that previously raised concern.  It is likely that a modified extension to the original cottage will be built using the client’s permitted development rights which no way affect the implementation of the new house consent. The client is extremely pleased with the outcome and the actions that Darryl undertook to secure the planning permission.

If you have a site that has been allocated as a non-designated heritage asset and its preventing you from developing the site as you would prefer, then please contact one of our planning consultants who will provide you with a free no obligation appraisal explaining how to overcome that restriction and how to maximise the development potential of that site.