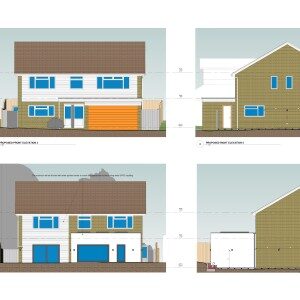 East Hampshire District Council: Dan Wilden has recently secured a certificate of lawful development to confirm that a proposed house extension is permitted development at Liphook in Hampshire.

Permitted development generally means that the developer can go ahead with the development without having to involve the Council. However many homeowners chose to obtain a certificate of lawfulness to have it confirmed by the Council that it is indeed permitted development. This useful step might well prove useful in the future when the property is being sold – it makes it much easier to demonstrate to the buyer’s solicitor that the works were lawful. It might also be useful to show to neighbours who might question why they haven’t been notified of a planning application.

In this particular case, the only question in respect of whether the proposal was permitted development was whether the exterior material for the extension was “similar appearance” to the materials used in the existing house – as by a condition of permitted development. Case law has established that there is considerable scope for interpretation in the word “similar” and it depends on the specific context with the aim of minimising visual impact and being sympathetic to the existing house. In this case we persuaded the Council that the white render proposed for the extension was sufficiently similar to the smooth white cladding boards which were on parts of the existing dwelling.

If you need advice on whether your proposal is permitted development, or if you would like to secure a certificate in advance of beginning work then why not contact Pure Town Planning to find out how we might assist.