Borough of Poole: Pure Town Planning are delighted to announce that we have recently secured planning permission for 20 apartments in the prestigious area of Lilliput, near Sandbanks in Poole. The scheme which was designed by local architects Anders Roberts Cheer, proposed the replacement of three houses with two 3-storey blocks of apartments. There were 10 flats in each block consisting of 3 bedroom units ranging in size from 1000 sqft to 1500 sqft.

Lilliput Road has undergone significant recent changes, with many former houses being replaced with flats. Indeed Pure Town Planning had secured consent for 35 flats up the road back in May 2014, which is currently under construction (see the link to our post on that approval here). Whilst strictly speaking the proposal did not meet the tests of PCS5 i(d) (the Borough of Poole planning policy on location for flats), Pure Town Planning  argued that in terms of principle, everything to the east of Lilliput Road/Compton Avenue/Bingham Avenue crossroads is predominately characterised by flatted development. When the previous scheme for 20 flats was considered by Planning Committee on 4th December 2015 this position was accepted by the Members of the committee and, whilst refusing that previous application only on overlooking and tree grounds, Policy PCS5 did not form part of the reasons for refusal. Therefore the planning officer considered that on this revised scheme for 20 flats, it would be unreasonable to resist the principle of flats in this location. 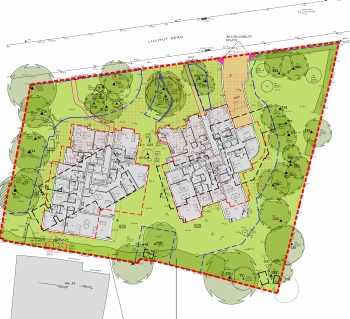 As previously mentioned this scheme followed a previously refused application and on that first scheme the planning officer did not raise any objection to the building’s height, scale or appearance of built form and its impact on the character and appearance of the area. Therefore there was no objection on these grounds the second time round. With regards to the impact on neighbours amenity, this revised proposal was considered by the planning officer to overcome the concerns leading to the previous reason for refusal with regards to the loss of privacy. The revised plans showed the first floor windows angled so that views from these windows will be towards the front of the site (and not towards neighbours as was the case on the previous scheme). The second reason for refusal on the first scheme was a harmful impact on trees. Under this revised scheme there will be now be no loss of category A or B trees. Added to this, given the reduction in the building footprint, the Arboricultural Officer now considered that there will be adequate room outside of the RPAs for machinery within the site required to construct the buildings. The tree officer concluded that this revised proposal would therefore no longer harm the health and retention of important protected trees on the site that contributed significantly to the existing character of the area and thus the scheme could now be supported.

As the revised scheme successfully overcame both previous reasons for refusal on the earlier scheme, the planning officer recommended the application for approval and it was granted under delegated powers within the 13 week time frame. If you are working on a large residential development and are looking for a firm who will work tirelessly to steer your development through the planning process then contact Matt in confidence on 01202 585524 or email us at info@puretownplanning.co.uk for a free no obligation planning consultation.