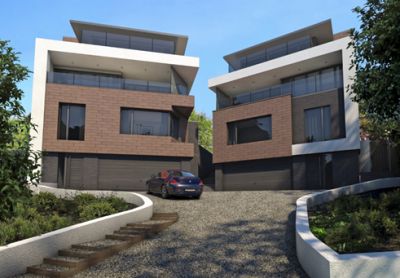 Borough of Poole: Pure Town Planning are pleased to announce that we have just won another appeal in Poole resulting in planning permission being granted for a material minor amendment application to an approved scheme at Flambard Road, Poole.

In 2014 we secured planning permission to demolish the existing dwelling and erect two contemporary detached dwellings at the site (see post here). The approved dwellings were three storey in height with ground floor parking and modern up-side down living accommodation.

Following the approval, the appellant then sought planning permission in April 2015 to an additional storey to dwellings and create a recessed third floor level. The upper floors allowed for the provision of further living accommodation and improved internal articulation for occupiers compared to the extant scheme with the additional floors utilising the site’s topography to take advantage of the surrounding open vistas, including views of Poole Harbour to the south.

We were successfully able to persuade the Inspector that the proposed development, designed by Union Architecture, was entirely appropriate and in-keeping with the character of the area and would sit comfortably in the context of the steep topography to the rear/side of the site. The planning appeal was therefore allowed with the Inspector stating “I conclude on this issue that the proposal would have an acceptable effect on the character and appearance of the area.”

If you have recently had your planning application refused, speak to Pure Town Planning for a completely honest review of your chances at appeal. Remember your only get a small window to appeal your decision, which varies from 28 days to 6 months depending upon your application, so do not delay getting in touch with us to discuss your options.