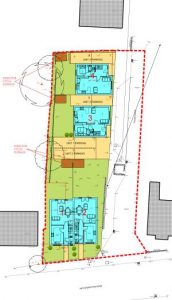 Wiltshire Council:  Darryl Howells has won another planning appeal this time in Salisbury, resulting in planning permission being granted for the demolition of a house and the erection of a pair of semi-detached houses and 2no. detached chalet bungalows (4 in total) with associated access and parking.  The scheme was originally drawn by Anders Roberts Cheer architects, based in Christchurch.

Darryl was also successful in securing a full award of costs against the Local Planning Authority (the LPA) on grounds of unreasonable behaviour.  The Planning Act allows for costs to be awarded against either party if evidence of unreasonable behaviour is presented to the Planning Inspector.  Such actions include missing appeal deadlines, lack of evidence substantiating reasons for refusal or causing unnecessary delays.  Darryl successfully argued that the reasons for refusal were vague, general and without accurate assertions about the proposal’s impact.  As the Costs Application has been granted, the LPA must now reimburse the appellant’s full costs of engaging Pure Town Planning to prepare, submit and handle the appeal.

The appeal site consists of a detached dwelling house but has a large private rear garden.  There is a private vehicular access lane to the side, serving a small housing development to the rear of the appeal site.  The proposed semi-detached houses would front onto Netherhampton Road and the 2 detached chalet bungalows onto the private lane to the east.

The Senior Planning Officer originally recommended approval for the scheme, but the Planning Committee overturned the recommendation. The decision notice stated that the proposed development would be harmful to the prevailing pattern of development and would offer unsatisfactory car parking arrangements.  Darryl presented a strong evidence basis argument against each reason for refusal of which the Planning Inspector accepted and allowed the scheme.

If you have recently had your planning application refused, speak to Pure Town Planning for a completely honest review of your chances at appeal. Remember you only get a small window to appeal your decision, which varies from 28 days to 6 months depending upon your application, so do not delay getting in touch with us to discuss your options.