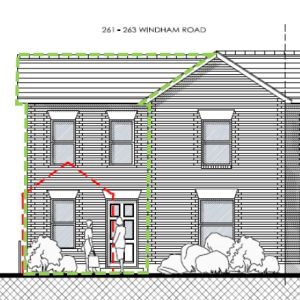 BCP Council (Bournemouth): Jess Glover is delighted to announce that she has recently won an appeal against BCP Council for demolition of garage, alterations and two storey extension to a house on Windham Road in Bournemouth, with the plans drawn by Anders Roberts Cheer Architecture.

The appeal site is occupied by an end of terrace two storey dwelling with an uncharacteristically wide plot and extensive outbuildings and the applicant sought to increase the amount of habitable accommodation and maximise the use of the site.

The client approached Pure Town Planning when the planning application had been refused and we provided free advice on the feasibility of appealing the decision and considered that there was merit in challenging the refusal.

As part of our appeal we prepared a comprehensive appeal statement setting out our justification for the scheme, that the extension would appear subservient to the main dwelling, by way of its set back from the established building line, reduced ridge height, narrower windows and reduced building depth, providing a functional living space for the occupants, which would positively contribute to the character and appearance of the area and evolution of the streetscene. Furthermore, we contended that the proposal would not harm neighbouring amenities.

The Inspector agreed with our assessment and allowed the appeal. The client was delighted with the appeal win.

If you have recently received a refusal and would like to know whether it is worth appealing then why not call Pure Town Planning on 01202 585524 or email info@puretownplanning.co.uk to get the honest opinion of one of our consultants.