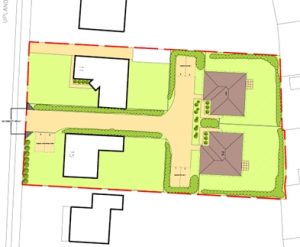 New Forest District Council: Pure Town Planning have won another planning appeal this time in Barton on Sea, resulting in planning permission being granted for the erection of two bungalows with associated access and parking.

The appeal site consists of the rear part of the gardens of two adjacent bungalows on Uplands Avenue with a new shared vehicular access from the road between the existing houses.

In February 2016, the applicant sought outline permission for the erection of two bungalows at the site. The application was refused by New Forest District Council on grounds that the development would be “inappropriate to its context and would be detrimental to local distinctiveness because the proposal would constitute an uncharacteristic backland development that would be materially out of keeping with the typical pattern and form of other development in Uplands Avenue.” Following this refusal, Pure Town Planning submitted an appeal to the Planning Inspectorate. We argued that there were various examples of backland development of a comparable density in the wider area and therefore the proposal would not be inappropriate to its context. The Inspector agreed and concluded “the proposed development would not cause unacceptable harm to the character and appearance of the area.” However, due to a disagreement between the Inspector and Council relating to the appropriateness of a proposed planning condition the appeal was dismissed on technical grounds.

As this was only a technical dismissal, we then submitted a full planning application for an identical development at the site. Given the Inspector’s previous conclusion, the application was promptly recommended for approval by the Council’s Planning Officers. However, due to local objection, the application was called before the Planning Committee for determination where the Committee Members concluded that the Inspector’s previous conclusion was fundamentally flawed and they unanimously refused planning permission.

Following this second refusal, Pure Town Planning again appealed to the Planning Inspectorate. We argued that the Planning Committee had failed to have regard to the Inspectorate’s previous conclusion and as a result the decision was contrary to the Government’s national Planning Practice Guidance, which states it is unreasonable for a Council to persistently object to a scheme or elements of a scheme which the Secretary of State or an Inspector have previously indicated to be acceptable.

Upon consideration of the appeal, the second Inspector agreed and concluded “I can see no reason to arrive at a different conclusion to that reached by the Inspector on this issue in the previous appeal.” The appeal was duly allowed and planning permission was granted for the proposed development. The issue relating to the appropriateness of the planning conditions was resolved beforehand through the submission of further information by the Council.

This appeal decision demonstrates the value of having a planning consultancy on board who have an up-to-date knowledge of the national Planning Practice Guidance and a tenacious attitude to secure planning permission.

If you have recently had your planning application refused, speak to Pure Town Planning for a completely honest review of your chances at appeal. Remember your only get a small window to appeal your decision, which varies from 28 days to 6 months depending upon your application, so do not delay getting in touch with us to discuss your options.