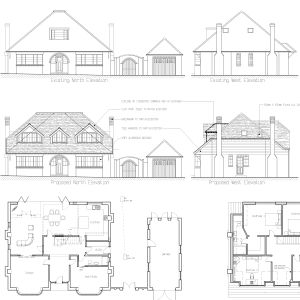 Eastleigh Borough Council: Darryl Howells, a director of the firm has successfully won an appeal against the decision that prevents remodelling of the dwelling including first floor roof extensions. The Council originally refused the scheme on the grounds of alleged harm to the character and appearance of the area; and harm to a building of local architectural interest.

After receiving the instruction from the client, Darryl prepared a robust planning appeal statement that argued that whilst the existing bungalow offered an intact example of a period bungalow, that its alteration to include a large rearward extension and new dormer windows on the frontage would comply with adopted policies, irrespective of the Local Planning Authority’s preference that the bungalow remains unchanged.

Darryl argued that the proportions of the extensions would be in keeping with other surrounding development and therefore no harm would appear to visual amenities.  The conclusion of the Inspector was “Consequently, the resultant dwelling would sit comfortably alongside the various houses and bungalows in the area. As the proposal would be compatible with the character of adjacent properties, and would fit well into the overall street scene, it would accord with the advice in the Chandler’s Ford and Hiltingbury Character Areas Supplementary Planning Document (2005)”.

If you have received a refusal of planning permission for your household extension(s) then contact one of our team for our opinion of your chances on appeal.