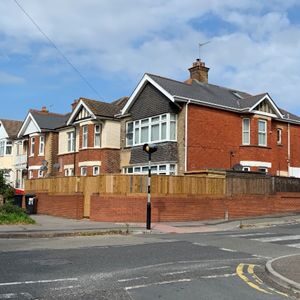 BCP Council (Bournemouth area): Jess Glover is delighted to announce that she has recently won an appeal against BCP Council for the erection of a fence and gates at Maxwell Road, Bournemouth.

The site is occupied by a dwelling which was historically divided into two flats. The client owns the upper floor flat and the front garden area and erected a fence and gates to enclose the front garden to provide a private amenity space for her family, which became an especially vital space for them during lockdown. The client approached Pure Town Planning as BCP’s Enforcement Team had contacted her informing that the fence and gates would require planning permission.

The planning application was refused as the LPA considered the boundary treatment was uncharacteristic of the area, creating a “fortressing” effect and would harm the amenities of the ground floor flat.

As part of our appeal we prepared a comprehensive appeal statement setting out our justification for the scheme, where we provided a comprehensive character analysis of similar front boundary treatments in the immediate area and demonstrated that the fence and gates would not be harmful to the character and appearance of the area or neighbouring amenity.

The Inspector agreed that there are numerous examples of fences above boundary walls surrounding properties and concluded that “the fence is not of an excessive height, with some of the lower section of the front elevation visible from the roadside. It is not a dominant feature, even in this prominent location. I am also aware that this is the only amenity space for occupants of No 81A and so the fence does provide some additional privacy and security in what is a busy area. As such, the fence and gate are not harmful to the character and appearance of the area, thereby being in accordance with policy CS41 of the Bournemouth Local Plan: Core Strategy (2012)”.

The client was over the moon with the appeal win. If you have recently received a refusal and would like to know whether it is worth appealing then why not call Pure Town Planning on 01202 585524 or email info@puretownplanning.co.uk for a FREE 30 minute consultation on how we can help you.