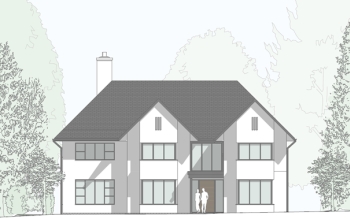 Borough of Poole: Pure Town Planning are pleased to announce that we have just won another appeal resulting in planning permission being granted for a replacement house at Newton Road, Poole.

The appeal property is situated within the Canford Cliffs Village Conservation Area and comprises a detached chalet bungalow dating from the post war period. The dwelling has a gable roof form with a stone clad ground floor and rendered first floor exterior.

The appeal proposals comprise the demolition of the existing building and the erection of replacement two storey dwelling design by Empery + Co. The proposed scheme draws strong influence from the traditional Arts and Crafts style dwellings within the streetscene and features a contemporary, yet sensitive, fenestration design. The dwelling has a traditional hipped roof with two matching gables on the front elevation and a sensitive dormer to the rear. The gables feature wide eaves which is a characteristic feature of Arts and Crafts architecture.

In determining the application, the Council concluded that proposed dwelling represented overdevelopment of the plot, which would have resulted in harm to the spacious and sylvan character of the Canford Cliffs Village Conservation Area. In addition, concerns were cited about the impact of a proposed garage to the front garden of the site, with officers concluding the building would cause harm to an adjacent protected tree and the openness of the streetscene.

At appeal, we were successfully able to persuade the Inspector that the proposed dwelling was respectful of its setting and the character of the Canford Cliffs Conservation Area. We argued that the bulk, scale and mass would not result in an incongruous building, rather that the proposal would be more characteristic of the larger properties found within the area. Upon consideration of the proposals, the Inspector concurred and allowed the appeal. He stated in his report that the proposed dwelling would “sit comfortably in its large plot without appearing cramped or detracting from the openness and spaciousness of the streetscene.”

To overcome the latter reason for refusal, we submitted amended plans without the proposed garage for consideration by the Inspector. We argued that acceptance of the plans would not conflict with the ‘Wheatcroft Principles’ as it would not prejudice any parties. The Inspector agreed and determined the appeal on the basis of the amended scheme, which was pivotal to the overall success of the appeal.

If you have recently had your planning application refused, speak to Pure Town Planning for a free of charge and completely honest review of your chances at appeal. Remember your only get a small window to appeal your decision, which varies from 28 days to 6 months depending upon your application, so do not delay getting in touch with us to discuss your options.