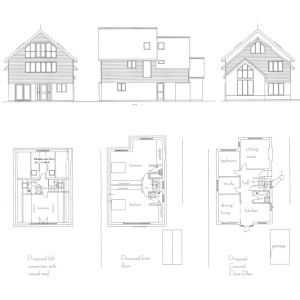 BCP Council (Poole area): Jess Glover is delighted to announce that she has recently won an appeal against the BCP Council’s decision to refuse a householder application to remodel and extend the existing dwelling in the Lower Parkstone area of Poole.

The appeal site comprises a residential bungalow with a hipped roof on Elgin Road in Poole and the scheme proposed to extend the property to a two storey dwelling with accommodation in an ancillary third floor contained within the roof. In terms of materials, the development proposed to clad the dwelling in timber boarding to provide a more contemporary appearance and reflect the evolving character of the surrounding area.

The appeal scheme was a revised application of a similar scheme which was refused in January 2019. Following this refusal, a staggered design was proposed to reduce the bulk and massing towards the front of the dwelling and create a more acceptable relationship to the streetscene. However, this scheme was also refused by the Council, at which point the applicants engaged Pure Town Planning to appeal the most recent decision. At appeal, we were successfully able to persuade the Inspector that the proposed extensions and alterations to the dwelling would amalgamate comfortably into streetscene and would not materially harm the amenities of neighbouring occupiers.

Upon consideration of the proposal, the Inspector concurred and allowed the appeal stating “I observed during my site visit that there are some considerably larger properties to the appeal proposal such as 50 Elgin Road, which are visually prominent within the street scene with accommodation at second floor within the roof space. While the appeal proposal incorporates similar roof space accommodation, the staggered design of the proposed development helps to reduce the overall bulk of the building. Furthermore, with the extended building occupying the same footprint as the existing, and in the context of surrounding development it would not appear overly large or out of proportion with the scale of other development. Indeed, it seems to me that in comparison with some nearby developments recently granted permission it would be quite modest.“

The applicants were pleased with the Inspector’s decision and thankful to receive a favourable outcome in the end.

If you have recently had your planning application refused, speak to Pure Town Planning for a free of charge and honest review of your chances at appeal. Remember your only get a small window to appeal your decision, which varies from 28 days to 6 months depending upon your application, so do not delay getting in touch with us to discuss your options.

Won on appeal: Householder alterations and roof extension in Southbourne