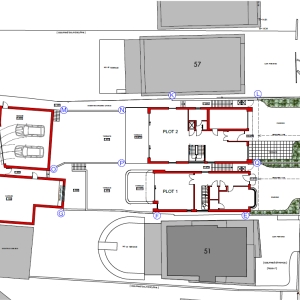 The appeal site is in a stunning location on the slope down towards Poole Harbour with great views. The proposal was for the demolition of the existing dated house and a plot split to create two contemporary dwellings making maximum use of the falling land to the rear of the site. The scheme was designed by David James Architects and Partners.

The Council refused the application largely on grounds that they considered the plot split would harm the character and appearance of the area by way of appearing cramped or dominant in the street scene. The Inspector disagreed stating the opinion that “Viewed within its general setting therefore, the proposed plot width, building width and spacing would not cause the development to be perceived as either incongruous or cramped” and that “the development would not appear atypically high, bulky or in any way ‘dominant’ relative to its setting.“

An issue relating to potential overlooking was dealt with by a minor alteration to the plans in relation to ground levels in the garden – the amended plans were pragmatically accepted by the Inspector, against the wishes of the Council, because he felt no party would be prejudiced by determining the appeal on that basis.

If you have recently had planning refused and want to discuss your prospects on appeal contact one of the consultants at Pure Town Planning.