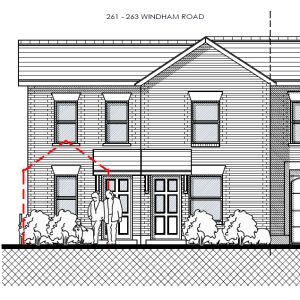 The LPA contended that the new end of terrace dwelling constituted poor design resulting in a cramped and congested development which would be out of keeping and incongruous with the streetscene and character of the area. Following discussions with the applicant, Pure Town Planning were instructed to challenge the Council’s decision at the Planning Inspectorate.

A robust appeal statement was prepared by Pure Town Planning which addressed the Council’s objections. The statement established that an end of terrace development of this type (designed by ARC Architecture) would not appear juxtaposed with its surrounding built form and would be comparable in design, appearance and the level of parking/hard-surfacing as seen elsewhere in Windham Road. The Inspector ultimately agreed with this assessment, establishing that the modest dwelling would not cause harm to the character and appearance of the area and safeguarded against any impact to neighbouring amenity – thereby allowing the appeal.

If you have recently been refused planning permission and would like us to assess an opportunity to appeal against the decision, then call Pure Town Planning on 01202 585524 or email info@puretownplanning.co.uk to see how we can help you.