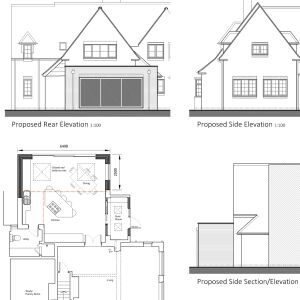 The existing dwelling is a semi-detached property, situated within a spacious plot and set back by the highway by approximately 17m. The property is of a traditional design with a gable roof form and brick exterior. Prior to our involvement, the dwelling had been extended on several occasions to provide additional accommodation.

The planning application sought permission for the erection of single-story flat roof extension to the rear of the property, which would provide an extended kitchen and dining area suitable for modern family living, whilst retaining a large rear garden.

Due to local objections, the application was deferred to the Planning Committee for decision. Despite a positive recommendation from officers, the Planning Committee refused planning permission citing that the design and flat roof of the extension, would be out of keeping with the host dwelling, which would result in visual harm to the character of the application property. To this regard, they argued that the proposal would be contrary to the Frensham Village Design Statement (2008), which advises that flat roofs should be avoided ‘wherever possible’.

Within our statement of case, we drew the Inspector’s attention to the Council’s Residential Extensions SPD (2010) which explains that “a flat roof on a small single storey extension may be acceptable if it cannot be seen from the street. If such an approach is taken, conditions may be applied to the planning permission to prevent the use of the flat roof as a roof terrace and prevent doors being inserted to allow access to this area”.

To this regard, we argued that owing to the rearward position of the proposed extension and its limited bulk, scale and massing, the flat roof design of the proposal would not to be materially harmful to the character of the area or host dwelling.

In determining the proposal, the Inspector agreed with our assessment and in allowing the appeal they concluded that “the clearly domestic nature and modest size and scale of the extension means that the character and appearance of the original dwelling would remain readily apparent. Consequently, the proposed development would not result in significant harm to the character and appearance of the host property even though it would not fully comply with the Village Design Statement”.

The client was thrilled with the appeal win and is looking forward to starting work on their new extension. If you have recently been refused planning permission and would like to know whether it is worth appealing, then why not call Pure Town Planning on 01202 585524 or email info@puretownplanning.co.uk to see how we can help you. Remember to be quick…. You only have 12 weeks to lodge an appeal for householder works.