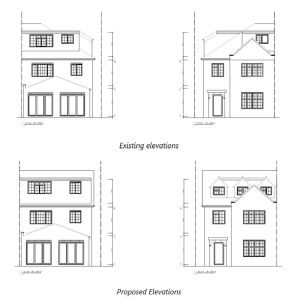 The existing dwelling is a semi-detached property from the interwar period, which is situated on the southern side of Westwood Road. Since its original construction, the property has been significantly altered on an ‘ad-hoc’ basis, which has resulted in a large rear dormer, a side dormer and a flat roof front dormer, all which are visible within the local streetscene.

The planning application sought permission to erect a hip to gable, front dormer roof extension and undertake a minor extension to the existing rear dormer. Collectively the works would rationalise and improve the existing roof form.

In refusing the planning application, the Council found that the proposed front dormer window roof extension would by appear over-dominant and visually intrusive in the roof slope and would fail to complement the existing building or the street scene. As a result, they concluded that proposed front dormer roof extension would cause harm to the character and appearance of the area.

Within our statement of case, we argued that the proposed development provided an opportunity to better enhance the architectural characteristics of the host dwelling by rationalising and improving the existing roof form in a manner that would be compatible with the local character. To this regard, we put forward a robust argument to demonstrate that the proposal would improve the relationship of the dwelling within the existing townscape by reflecting the form, design and frontages of neighbouring properties, supporting the objectives of the development plan Policy LP1

In determining the proposal, the Inspector agreed with our assessment. In allowing the appeal they concluded that “Viewed as a whole, the proposed hip to gable enlargement, combined with the other roof extensions, would rationalise the roofscape compared to the existing front, rear and side dormers. Although the formation of a gable end would not be symmetrical with the hipped roof of the attached dwelling, this is not uncommon in pairs of dwellings locally, and the proposal in its entirety would provide some balance to the roof, compared to the existing situation. On balance therefore, taking all the above into consideration, whilst the proposed development would conflict with some guidance in the SPD, overall it would enhance the character and appearance of the existing dwelling and the area.”

If you have recently been refused planning permission and would like to know whether it is worth appealing, then why not call Pure Town Planning on 01202 585524 or email info@puretownplanning.co.uk to see how we can help you.

Remember to be quick…. You only have 12 weeks to lodge an appeal for householder works.