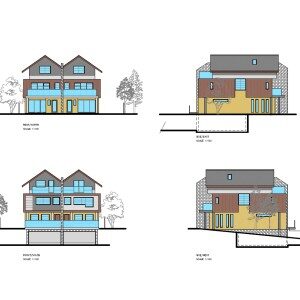 BCP Council (Poole):  Darryl Howells, a director of the firm is excited and pleased to announce an appeal win securign consent for the demolition of an existing dwelling and the erection of four houses on a site in Danecourt Road, Poole.  The client instructed the plans to be drawn by bespoke architect James Munday but instructed Darryl to appeal the decision once the Council refused permission for several grounds.

The replacement dwellings comprised a pair of semi-detached, 4 storey houses on the frontage of the site, with another pair of semi-detached chalet bungalows positioned to the rear of the dwellings to the front. The topography of the site was a key factor as the ground level at the front of the site is circa 5 metres lower than at the rear. The houses on the frontage will accommodate an integral garage in the basement, an open plan lounge and kitchen area on the ground floor, with 2 large bedrooms at first floor and another 2 within the roof. The chalet bungalows offer an open plan living space with 3 bedrooms in each.

The Local Planning Authority refused the scheme over concerns of adverse harm to the character and appearance of the area; harm to the living conditions of nearby residents with particular concern of overlooking and adverse harm to highway safety due to the parking provision.

In Darryl’s appeal statement he tackled each of those concerns head-on with strong planning arguments, evidence that supported his case and background knowledge of the policies that were in being used by the LPA to justify their decision.  In the Inspector’s decision letter, it was accepted that within the street scene there was a diverse range of architectural forms and that backland development would make an efficient use of land, especially in areas close to public transport and shops.

In terms of the design, the Inspector was convinced by Darryl’s arguments that no material harm to the street scene would occur despite the building on the road frontage being a “fairly bulky appearance including cantilevered ground floor terraces, a projecting stone dividing wall between the dwellings, and a pronounced ‘box like’ first floor with asymmetrical windows below deeply overhanging eaves”. When discussing the chalet bungalows positioned at the rear of the site, despite being the first having regard to the pattern of development, the Inspector said “The two dwellings to the rear of the site would be largely hidden from public views… and, in particular, the dwellings would have visual affinity with nearby No.7 Harbour View Road which also has no direct road frontage. They would not, therefore, appear isolated or uncharacteristic”.

When reviewing the effect on living conditions, the Inspector accepted Darryl’s opinion that the proposed rearward chalet bungalows found that “the distances or angles between properties would be sufficient to avoid any harmful loss of privacy or natural light”.

Whilst the proposal would introduce vehicles to the centre of the site close to other rear gardens, the Inspector accepted the opinion that “this additional activity would not cause harm to the living conditions of neighbouring residents”.

Finally when discussing highway safety, the Inspector accepted that the proposed garages sizes fell below that stipulated in the Council’s Parking SPD however found not evidence that the spaces could not accommodate two cars.

Overall the client was ‘stunned’ by the decision (and so was Darryl – truth be known) but both are extremely pleased – goes without saying.  If you have received a refusal for a comprehensive scheme, or if you have land that could be developed then please contact one of our consultants who will appraise the scheme and offer the advice that you need.