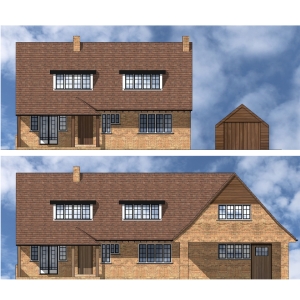 East Dorset District Council: Pure Town Planning are thrilled to announced that we have won an appeal in the South East Dorset Green Belt for significant extensions to an existing chalet bungalow.

The appeal proposal comprises the demolition of the existing garage and workshop and the erection of a 2 storey side extension incorporating a car port and workshop. The proposal has been driven by the owner’s aspiration to extend the existing dwelling in a sensitive manner to create a modern functional family home. The proposal provides a reasonable sized master bedroom, living room, kitchen, car port, workshop and a further 3 bedrooms. The plans were prepared by BeMa Architects.

The application was refused planning permission by East Dorset District Council because the extensions were deemed to exceed the ‘50% rule’ set by Policy GB3 of the Local Plan and therefore constituted inappropriate development within the Green Belt.

The policy states “Within the Green Belt, extensions to or replacements of existing dwellings will only be allowed where: (a) the extension or the replacement dwelling does not materially change the impact of the dwelling on the openness of the green belt, especially through its height or bulk; and (b) the size and scale of a proposed extension does not dominate the existing dwelling; and (c) the size of any garage building must be commensurate with the replaced or extended property. Any space above ground floor should be limited solely to storage use. Such space should not be capable of later conversion to residential use.”

In determining the planning application, the Council gave no weight to the works that the applicant could undertake to the property as permitted development, which formed their fall-back position. Following the refusal, we worked with the applicant and secured a Lawful Development Certificate (LDC) for a scheme which transformed the property into a large 5-bedroom family home with detached double garage and workshop. The permitted works far exceeded the ‘50% rule’ but as the application was for an LDC, local plan policies did not apply. (See our post here)

In assessing the proposal and our arguments about the appellant’s fall-back position, the Inspector stated the following, “Compared to the appeal scheme, the fallback scheme would have a far greater spatial and visual impact on this part of the Green Belt. The three separate extensions combined with the three outbuildings, as well as the new driveway, shown on the fallback, would result in a significant encroachment and intrusion into the Green Belt. I am satisfied that, on balance, the consequent harm to the openness of the Green Belt would be far greater with the fallback than with the appeal scheme.” The appeal was subsequently allowed with the Inspector concluding that whilst the proposal constitutes inappropriate development in the Green Belt very special circumstances exist to justify the grant of planning permission.

If you own a property within the Green Belt and would like to extend then why not call Pure Town Planning on 01202 585524 or email info@puretownplanning.co.uk for a FREE 30 minute consultation on how we can help you.