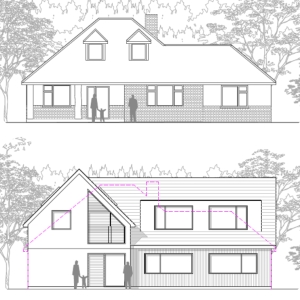 Dorset Council (East Dorset area): Jess Glover is delighted to announce that she has won an appeal in the South East Dorset Green Belt for householder extensions (over 50% increase in floorspace) and remodel of an existing chalet bungalow.

The appeal proposal comprises the erection of front and rear single storey extensions, first floor extensions with new roof and a remodel of the exterior to provide a contemporary functional family dwelling. The proposal provides a reasonable sized master bedroom, kitchen, bathroom and a further 3 bedrooms. The plans were prepared by architects rbstudio.

The application was refused planning permission by the Council because the extensions exceed the ‘50% rule’ set by Policy GB3 of the Local Plan and therefore were considered to constitute inappropriate development within the Green Belt.

The Council gave no weight to the works that the applicant could undertake to the property as permitted development, which formed their fall-back position. Under permitted development the applicants could erect an 8 metre single storey flat roof extension to the property, which would have significantly greater impact to the openness of the green belt than the appeal proposals.

As part of the appeal submission, we argued that the Council failed to have regard to Section 38(6) of the Planning and Compulsory Purchase Act 2004 which states that “planning applications must be determined in accordance with the development plan for an area, except where material considerations indicate otherwise”. In this instance, whilst it was acknowledged that the proposal exceeded the ‘50% rule’, the harm to openness of the green belt caused by the proposed extensions should have been assessed against the harm caused by the permitted development scheme. We argued that as the permitted development had a significantly greater floor area when compared to the planning application (366.4 sqm v. 252.2 sqm) this would cause significantly more harm to the openness of the greenbelt than the appeal scheme.

In assessing the proposal and our discussion of the appellant’s fall-back position, the Inspector stated the following:

“the appellant has a fall-back position in the form of a realistic prospect of achieving a full width 8m deep single storey rear extension through the prior approval procedure. The additional floorspace of about 366sqm would be more than the 252sqm being sought through this appeal. And of particular importance, it would significantly increase the building’s footprint and the consequential loss of openness. The fact that this would be confined to the private domain does not preclude it being an important consideration.

In addition, this type of extension (possibly with the addition of a rear dormer constructed under normal permitted development tolerances) would result in compounding the already dated and unbalanced form of the building as is illustrated in Figure 9 of the grounds of appeal.

For these reasons I regard the appellant’s fallback position as having significant weight in the green belt balance.”

The Inspector subsequently allowed the appeal concluding that while the proposal does represent inappropriate development in the Green Belt, very special circumstances exist to justify the grant of planning permission.

If you own a property within the Green Belt and would like to explore the possibility of extending it then why not call Pure Town Planning on 01202 585524 or email info@puretownplanning.co.uk for a FREE 30 minute consultation on how we can help you.