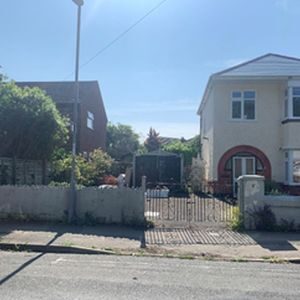 BCP Council (former Christchurch Borough): Jess Glover is delighted to announce that she has recently won an appeal against BCP Council for the demolition of the existing garage erection of a detached dwelling on land at Avenue Road in Christchurch. The plans were drawn by DOT Architecture.

The site comprises a side garden to an existing property which benefits from an uncharacteristically wide plot compared to other properties along the road. The site is within the settlement boundary of Christchurch where new residential development is acceptable in principle.

The planning application was recommended for approval by officers, however this was overturned by planning committee where a majority vote resulted in refusal. Upon reviewing the reasons for refusal, we advised the client that we considered the appeal had a decent chance of being allowed at appeal and were subsequently instructed to handle the appeal process.

The planning application was refused as the LPA considered the proposal would fail to respect the character of the surrounding area and built environment.

As part of our appeal we prepared a comprehensive appeal statement setting out our justification for the scheme, where we provided an in-depth analysis of the proposal and demonstrated that the proposal would safeguard the character and appearance of the area.

The Inspector in allowing the appeal accepted that there was a wide variety of building styles and forms in the immediate area and therefore and additional dwelling would not be harmful.

The client was delighted with the appeal win. If you have recently received a refusal and would like to know whether it is worth appealing then why not call Pure Town Planning on 01202 585524 or email info@puretownplanning.co.uk for the opinion of one of our consultants.