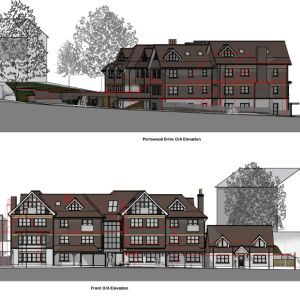 BCP Council (Bournemouth):  Darryl Howells, a director of Pure Town Planning, is thrilled to start the new year on a successful note with a significant appeal decision.  On 29th December, the Planning Inspectorate allowed the scheme for the demolition of the Horse & Jockey public house, and the erection of a block of 28 flats with car parking and vehicular access.  The drawings were prepared by Trinity Architecture, and the consultant team led by Darryl also comprised Simon Corp of S106 Affordable Housing; Andrew Cleaves of Treecall Consulting; and Phil Casely of JPC Highway Consultants.

During the Hearing, there were several issues that were discussed and following the robust arguments made by Darryl, the Inspector accepted the following considerations:

Heritage Assets: – The Inspector accepted that whilst being a “non-designated heritage asset” with the original architectural detailing presenting an elegant façade to Wimborne Road, the architecture was not unique to Bournemouth and there is no substantive evidence that it played an important role in the development of the surrounding townscape or to the identity of the town. He concluded that the building has low significance overall as a heritage asset. That said its demolition would cause substantial harm and be contrary to adopted policies.

Character and appearance:  The existing building has presence and visibility on Wimborne Road, however does not make a significant contribution to the area’s character and appearance.  In terms of the proposed density would be higher, but that in itself does not result in harm to the character and appearance of the area.   The replacement building would be a considerably larger development than the public house, with accommodation spread over four floors. However, articulation in the façade, including a recessed entrance and varying roof lines would prevent a bulky appearance from Wimborne Road.   The scale of the proposed building would not appear incongruous with the somewhat functional urban context.   Notwithstanding the modern form, the building would include a number of architectural devices that echo more historic building styles. While their incorporation into the building may not have the elegance of the existing building, I find that they would not be inconsistently used, compete with one another, nor would they result in a building that somehow masked or was dishonest to its modern form. Ultimately, the detailed design would not result in a building that was at odds with the mixed appearance of the area in which it was set.

Neighbouring residents:  A number of windows are proposed facing neighbouring houses and gardens, however although there will be an increase from 1 to 18 windows, it would not result in significant harm to the living conditions of the occupiers due to obscured glazing, and use of rooms within the buildings.  Many of the proposed windows fell short of the Council’s adopted prescribed distances between windows however Darryl overcame that with sound reasoning.

Future occupiers:  A number of the units would not meet the Nationally Described Space Standards (NDSS) but the NDSS are an indication of appropriate spaces and there is no substantive evidence that failure to meet them in this case would necessarily result in substandard living accommodation. Although it would be far from spacious, the plans indicate that basic furniture to meet the day to day needs of one or two occupants could be accommodated within the smallest unit.

Very few of the units have any private outside space. The development would include some two-bedroom units and Residential Development: A Design Guide (2008) indicates that private gardens are particularly important where a development includes family units. A small external grassed area is proposed but due to accessibility and gradient, its usefulness as an amenity space is questionable.  However, Darryl strongly opined that the site is very close to Redhill Common which includes opportunities for walking and sitting. Although off-site space could not provide the same level of amenity to future occupiers as would be obtained from stepping directly out into it, in this case, the space is sufficiently close to provide easily accessible outdoor space.   With regard to the above, therefore, although a less dense development could allow for bigger units and more outdoor space, in the absence of a specific development plan policy requirement to provide external space or meet the NDSS, I find that the development would provide adequate living conditions for future occupiers.

Community facilities: Policy CS12 sets out that proposals which would lead to the loss of premises or sites used, or last used, for a community use will not be permitted unless one of four criteria are met. The second criterion is that there are adequate alternative facilities available locally.  Darryl pointed to a number of public houses, but the Council confirmed at the Hearing that, due to the topography, only one of those was within an appropriate walking distance, and that was at a distance at the upper end of acceptable limits.   However, although the Policy is written in the plural, such that it reads as requiring more than one alternative facility, there are others that are only a little further on foot and the Darryl’s suggestion that they could be easily accessed by public transport was not disputed. Therefore, the Inspector concluded that there would be one accessible facility available locally, another that could be accessed by those willing or able to tackle the intervening gradient, and other further choice relatively nearby if public transport were used. He found such to be adequate alternative facilities, that would meet the relevant test in Policy CS12.

Highway safety:  Concerns were raised about the technical specification of the undercroft car park with a steep access ramp. The lack of transition ramp with a slacker gradient at its bottom end could lead to a risk of vehicles grounding. Such would deter use and could result in parking on nearby roads causing obstructions to carriageways and footways, and other highway dangers.  Darryl argued that a planning condition could be imposed to require those technical details so refusing the application on this basis was contrary to Planning Practice Guidance (PPG).

Housing need and the 5 Year Land Supply:  Darryl challenged the Council’s ability to demonstrate the land supply of the Council, leading to their acknowledgment that the Council could only demonstrate a 2.9 year supply of deliverable housing land. Therefore, Framework Paragraph 11(d) must be considered. Although the proposal would only provide one- and two-bedroom units, it was confirmed at the Hearing that there is a need for that type of accommodation in Bournemouth and that the development would not result in an imbalance of accommodation types in the surrounding neighbourhood. In this context, the delivery of housing proposed is of very significant benefit.

Ultimately the conclusion of the Inspector was to grant full planning permission for the scheme which the appellant has confirmed verbally will be implemented shortly.  Darryl is immensely proud of his performance during the two day virtual Hearing, as he clearly overcame the strong objections from the Senior Planning Officer; Urban Design Office; Heritage Officer; and Transport Development Team Leader.  The client is extremely pleased with the outcome and Darryl’s professional ability to turn the negative of a refusal into a positive of the approval, which with the assistance of Simon Corp offers zero affordable housing so each of the 28 flats will be sold on the private open market.

If you have a site, or a building that is vacant and you want to know how to maximise the development and income potential; or alternatively, you have received a refusal of planning permission and want to know about the chances at appeal, then please contact one of Pure Town Planning’s consultants or Darryl himself to discuss.