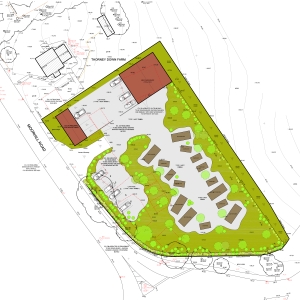 Eastleigh Borough Council:  Darryl Howells, a director of the firm has secured a successful appeal for a challenging scheme located in the countryside, to the east of Southampton.  The applicant originally applied for the creation of a landscaped embankment; demolition of existing buildings and the creation of a new detached two-storey building comprising offices and storage areas, erection of a detached workshop and the change of use to display and caravan sales with associated office and workshop.

The scheme was designed by Jon Holt of Watts Holt, and supported by Darryl who wrote the planning statement and whom was instructed as the handling agent.  Despite robust arguments presented by Darryl, the Council failed to issue a decision so the applicant instructed to appeal against non-determination.

The Council’s main objection to the scheme was based on a planning policy supporting the retention of a ‘Strategic Gap’ that sought to prevent urban areas from merging.  Darryl strongly disagreed with the policy wording and the implications for the site itself as it already had some buildings and a lawful use (also previously secured by Darryl using a Certificate of Lawfulness application) but the LPA failed to acknowledge the lawful use as being a material consideration to the application.

In this instance Darryl opted for an Informal Hearing rather than a written representation so he could present the planning arguments direct to the Inspector in a meeting arena, and respond to the inadequate arguments made by the Senior Planning Officer, who tried gallantly to defend the Council’s inaction.

In accepting Darryl’s arguments, the Planning Inspector agreed that the proposed layout offered caravan sales in a setting that was more akin to a caravan site rather than a car/ motorhome showroom forecourt often seen on an industrial estate. Darryl suggested that the site could be landscaped with additional planting and removal of hardstanding would in effect soften the appearance of the site from the public realm.  The Inspector supported that suggestion openly.

In respect of the ‘Strategic Gap Policy’ the Inspector accepted its purpose and the rationale behind the policy but acknowledged the lawful use and the buildings thereon were material, and that the finished condition of the land and buildings would be an enhancement over their current condition.

If you have a development scheme that clearly contravenes planning policies do not simply shelve the idea, speak to a member of the Pure Town Planning team who can often conjure up robust planning arguments that could support your scheme despite an obvious policy objection.