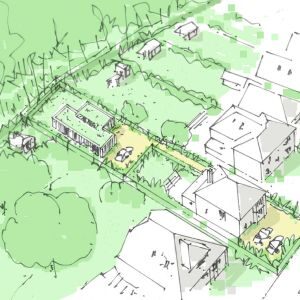 BCP Council (Poole): Pure Town Planning are pleased to have won an appeal against BCP Council resulting in planning permission being granted for one detached house on a back garden site in Broadstone, Dorset. The outline scheme was designed by DMW Architects.

The Council turned down the proposal on grounds that the new house on this garden would be contrary to the established pattern of development in the street and thus would harm the character and appearance of the area. The Inspector agreed that there would be some harm to the character of the area and thus conflict with Policies PP27 and PP28.

However the Inspector noted that due to the low housing delivery of Poole in the January 2021 Housing Delivery Test (below 75% of requirement) the relevant housing policies are considered out-of-date as set out in the National Planning Policy Framework paragraph 11. As such the “presumption in favour of sustainable development” was applied and the Inspector decided that the adverse harm to the character of the area would not “significantly and demonstrably outweigh” the benefits of the new house.

This is an example of the case of the so called “tilted balance” tipping in favour of the development even when a limited amount of harm has been identified.

If you have had a planning application refused, get in touch with Pure Town Planning to have your chances on appeal reviewed by one of our consultants.