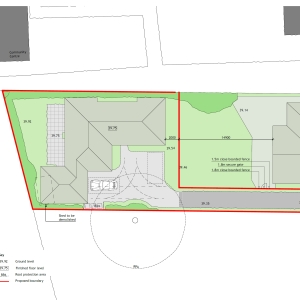 Borough of Poole:  Darryl Howells has successfully won an appeal to sever land and erect a detached bungalow with garage at the rear of a dwelling in Merley Lane, Poole. The scheme, originally designed by Poole-based architects Trinity Architecture, had been refused planning permission by the Borough of Poole Council on the grounds of harm to the character and appearance of the area.  As evidence in support of the reasons for refusal the Council relied heavily on a previous Planning Inspector’s decision for a similar development on a site 2 doors down from our appeal site.

Darryl convinced the Planning Inspector that the appeal decision should have been given limited weight as a material planning consideration due to its age and the significant shift in planning policy both nationally and locally in terms of presumption in favour of development for housing. In coming to the decision to allow the appeal, the Inspector further accepted the arguments from Darryl that (i) the vegetation in the area would substantially screen the proposed development from the public realm and neighbouring dwellings; (ii) that the prevailing pattern of development in the wider area (even some distance for the appeal site itself) allowed for back land development; and (iii) no noise disturbance would be caused to neighbours due to the vehicular movements associated with the scheme.

If you have received a refusal of planning permission, then please contact a member of the Pure Town Planning team to assess the reasons for refusal and suggest the strategy or planning arguments that would overcome the refusal either at appeal or through a revised planning application.