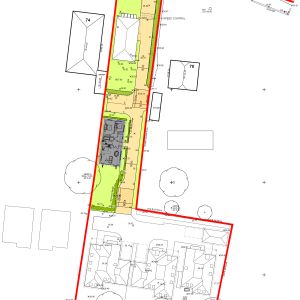 BCP Council (formerly Borough of Poole): Darryl Howells has won an appeal for a new client, for the erection of a detached bungalow in Merley. The scheme was originally designed by Anders Roberts Cheer and handled by them, but refused on grounds of alleged harm to the character and appearance of the area, harm to the intended occupiers, and harm to occupiers of the dwelling to the north of the proposed bungalow.

Following the refusal, the client instructed Darryl to appeal the decision, in light of his extensive planning experience in Poole, knowledge of the area and numerous appeal wins secured since he joined the firm in November 2016.

Darryl put before the Inspector the arguments that backland development is now commonplace in Merley Lane, and the redevelopment of this site would be wholly acceptable. Despite being positioned between the original dwelling to the north and other backland dwellings to the south, Darryl successfully argued it would not be incongruous or materially harmful.

In respect of the amenities of the occupiers, the Inspector accepted that motorised traffic passing the bungalow would not cause harm, and where windows are potentially looked into by pedestrians walking passed, then the occupier could install net curtains or blinds, but even if future occupiers chose to close their curtains it would not render the internal environment poor. Finally in respect of neighbouring amenities, the window to window relationship would be acceptable.

If you have received a negative pre-application or decision on a planning application and you want to discuss potential arguments to overcome the objection or reason for refusal then please contact Pure Town Planning for a free confidential discussion.