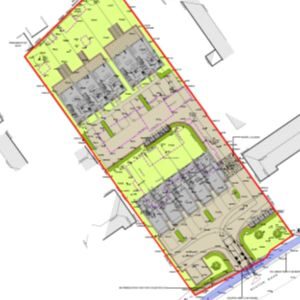 Dorset Council: Jess Glover is delighted to announce that she has recently won an appeal against Dorset Council to demolish existing buildings and erect ten houses with associated parking at the site in Weymouth, with the plans drawn by ARC Architecture.

The appeal site is located in a prominent position with panoramic views across Portland Harbour and currently accommodates a dated pair of semi-detached dwellings with substantial rear gardens.

The client approached Pure Town Planning as the LPA had refused planning permission and they sought our advice on whether to appeal the decision. Their planning application decision had four reasons for refusal: character and appearance; lack of affordable housing contribution; impact on neighbouring amenity and; insufficient surface water drainage information. Appraising the refused plans and documents, we came to the conclusion that there would be merit in appealing the decision.

To overcome the second reason for refusal, we instructed S106 Affordable Housing to produce a Viability Report, which Dorset Council agreed demonstrated the development would be economically unviable if it were to provide affordable housing contribution. In response to the fourth reason for refusal we instructed Calcinotto to produce a Drainage Strategy which demonstrated that surface water drainage would be adequately managed on site.

As such, the Inspector was required only to consider the effect on the character and appearance of the area and the effect on the living conditions of neighbouring properties, with particular regard to outlook.

In support of the scheme we provided a comprehensive appeal statement which justified that the proposal would complement the variety of architectural styles in the area and would not give rise to harmful overbearing, thus preserving neighbouring amenity.

The Inspector considered that “the variety in surrounding style and form does not give a clear pattern to follow” and therefore “the proposal would create another enclave that reflected its time of construction, whilst preserving the spacious open character with a deep set-back and landscaped frontage”. Furthermore, in regard to neighbouring amenity, the Inspector considered “its separation to other plots, and the relationship of other surrounding dwellings to the proposal is such that privacy and outlook would be safeguarded to an acceptable degree”.

The client was delighted with the appeal win. If you have recently received a refusal and would like to know whether it is worth appealing then why not call Pure Town Planning on 01202 585524 or email info@puretownplanning.co.uk for a FREE 30 minute consultation on how we can help you.