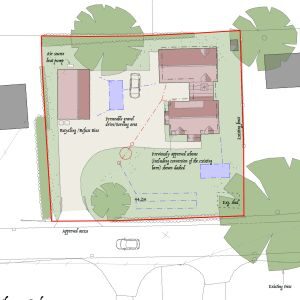 The site is outside of the defined villages in The New Forest and is occupied by a detached barn-style building which was constructed in 2010 to support the former light industrial use of the site. An appeal was allowed in 2015, and a later amended application approved in 2017 to convert the existing barn and form a two storey extension to create a new dwelling on the site.

The planning application was refused as the LPA considered the proposal by virtue of its siting, scale, design and form would fail to respect the rural character of the surrounding area and built environment. Furthermore, the LPA objected to the loss of the existing barn, whereas the extant permission retained the barn structure.

As part of our appeal we prepared a comprehensive appeal statement setting out our justification for the scheme, where we provided an in-depth analysis of the proposal compared to the extant permission on the site which demonstrated that the proposal only represented a minor increase compared to the extant scheme, however retained the overall rural character and form. Furthermore, we provided justification that the existing barn was not suitable for conversion as it would provide insufficient head height to meet Building Regulations.

During the course of the appeal, we advised the client to commence work on the consent so it would remain extant in perpetuity and provide a material fallback position.

The Inspector in allowing the appeal agreed that there the design was acceptable; “I find that the design would include a number of devices set out in the DG that help to avoid suburbanisation. I see no reason to conclude that the simple presence of a new build dwelling should appear suburban, and the architectural forms proposed are inherently rural in their detailing and arrangement. They are not dissimilar to other dwellings and outbuildings elsewhere in the distinctly rural vicinity.”

In terms of the loss of the barn, the Inspector considered it was acceptable as “although retention would maintain the barn’s positive contribution, there is no substantive evidence that it is a fundamental part of the character and appearance or historic development of the area, such that it should be retained for its own sake. I find that the loss of the barn would not, in itself, result in harm to the character and appearance of the area or special qualities of the National Park.”

The client was over the moon with the appeal win. If you have recently received a refusal and would like to know whether it is worth appealing then why not call Pure Town Planning on 01202 585524 or email info@puretownplanning.co.uk for a FREE 30 minute consultation on how we can help you.