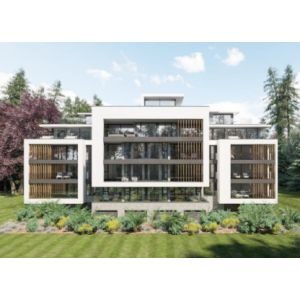 BCP Council (Poole):  Darryl Howells, a director the firm is extremely pleased to announce the winning of a landmark appeal decision, for the demolition of a non-designated heritage asset positioned in the Branksome Park and Chine Gardens Conservation Area (BPCGCA), and the construction of a block of 25 apartments with basement car parking.  Following the refusal of the planning application, the client instructed Darryl to submit the appeal, manage it in terms of administrative support and provide expert witness for planning matters arising from the scheme and adopted planning policies.   The remainder of the appeal team included Robert Walton QC from Landmark Chambers, Laurie Marlow from David James Architects & Partners Limited, Steve Cox from Treecall Consulting Limited, and finally Jason Clemons of Savills.

Upon receipt of the refused plans, the appeal team met with the client and discussed the actions necessary to occur through the appeal process in order to secure the best opportunity to secure the successful outcome.  Part of that discussion included the submitted of amended plans to the Planning Inspector to address two particular reasons for refusal, the first relating to the proximity of the building to a protected tree; and the second to allow for natural light to enter into the solely northern facing flats. The submission of the plans under what is termed the ‘Wheatcroft’ principle required Darryl to undertake his own public consultation exercise, writing to every person that the Local Planning Authority (LPA) wrote to during their formal public consultation event that followed registration of the application.  Darryl explained in simplistic terms the changes to be made, offering to meet with residents to discuss the procedure and the justification behind the changes.  Once Darryl’s consultation was over, he presented the information and representations to the Inspector as part of the appeal submission, and it is these amended plans that have been approved by the Inspector.

Additional information that Darryl had to provide with the appeal were the Grounds of Appeal, Statement of Common Ground, Final Comments  and his own Appeal Statement with supporting evidence; whilst co-ordinating the submissions of his fellow consultants under the advice of Robert Walton QC.  Darryl requested the appeal to be heard by Public Inquiry where witnesses for the LPA and the appellant could be cross-examined by barristers.  The Planning Inspectorate initially downgraded the appeal to a written representation, however following extensive negotiations with PINS, Darryl convinced the Inspectorate to allow the appeal to be heard by Informal Hearing (no cross-examination but a virtual hearing led by the Inspector where evidence and witnesses can be questioned).

Returning to the appeal decision, the Inspector outlined in her agenda for the Hearing the following topics (i) effect on protected trees; (ii) the loss of a local heritage asset being acceptable; (iii) impact to the character and appearance of the BPCGCA; (iv) climate change; and finally (v) effect on the living conditions of occupiers with particular regard to natural light.   The decision notice correspondence issued by the Planning Inspector was comprehensive and ran to 35 pages so I will summarise the conclusions as:

In the conclusion of the appeal decision, the Inspector found that there would be harm caused by the development by the loss of the non-designated heritage asset however the benefits of the scheme would weigh in favour of the development despite that harm and therefore there was no conflict with the development plan or Framework.

In Darryl’s opinion this decision has wider implications for developers considering proposals in the BPCGCA especially if the scheme requires the demolition of an existing building irrespective of its contribution to the conservation area.   Whilst pleased with the outcome, we are mindful of the considerable cost to the client and the delay it has taken to get this decision.

We would remind all applicants of the importance to get the right professional team behind you from the outset, and we at Pure Town Planning have the abilities to bring your development forward using the right planning arguments so hopefully you can avoid the appeal process. However if that procedure is required our consultants can manage the whole process for you, whilst offering credible witnesses of experience and knowledge to assist your case.