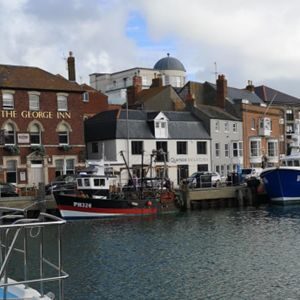 Dorset Council: Chris Miell has recently won an appeal against Dorset Council and secured retrospective planning permission for the installation of replacement of windows and doors on the front elevation of an existing restaurant which is located on Weymouth’s historic harbourside.

The appeal property is a two-storey C19 building located on Custom House Quay, Weymouth. It forms part of a group of historic buildings which were originally constructed to fulfil harbour functions, many of which have now been converted to other uses.

The site is located within the Weymouth Town Centre Conservation Area. In addition, the property is identified as an ‘Important Local Building’ within Council’s Conservation Area Character Appraisal due to its historic use, interesting design characteristics and position relative to the wider setting.

The property was acquired by the current owner approximately two years ago and it was in a very poor state of repair. The former timber windows and doors had failed and the building had extensive damp and mould problems caused by water ingress. To ensure that the building remained habitable and safe for use by restaurant patrons and workers, the owner undertook extensive and immediate repairs works, which included the replacement the rotten windows and doors with high-quality and robust aluminium fenestration.

Following the installation of the windows and doors, the property owner was informed by the Council that the works required planning permission. In determining the subsequent application, the Council refused permission and concluded that the replacement windows by way of their design, style, colouring and detailing would neither preserve or enhance the character and appearance of the Weymouth Conservation Area.

Within our appeal statement, we argued that the Council had failed to take account of considerable variety of building types along Custom House Quay, which exhibit a wide array architectural styles and details, including a range of external materials including brickwork, coloured render, painted facades and stonework.

Moreover, we argued that design and appearance of windows and doors of the buildings which face onto Custom House Quay is equally varied. Whilst the proportionality of the fenestration found on the buildings is typically informed by the traditional architecture of the host building; the design, style, colour and detailing of the windows varies considerably along the harbourside.

The Inspector agreed with our assessment and found that “Whilst the style, design and colour of the replacement windows may be different to that of other buildings along Custom House Quay, due to the existing variety, I do not necessarily find that this results in harm to the Weymouth Town Centre Conservation Area. Considering the range of building designs, mix of colours and the varied approach to fenestration that characterises this part of the Weymouth Town Centre Conservation Area, I do not find the replacement windows to be overly prominent, or to represent a distracting feature that is readily noticeable in the context of its surroundings. Furthermore, I note that the design of the windows and doors, is such that it allows for the retention and legibility of the existing building. As a result, I find that the proposals preserve the character and appearance of the Weymouth Town Centre Conservation Area.”

If you have recently been refused planning permission and would like to know whether it is worth appealing, then why not call Pure Town Planning on 01202 585524 or email info@puretownplanning.co.uk to see how we can help you.