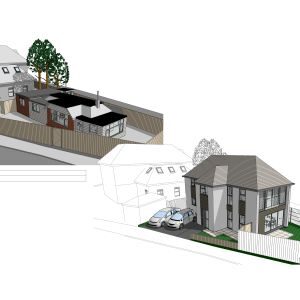 BCP Council (Bournemouth): Jess is delighted to announce that she has recently won an appeal against BCP Council for alterations, formation of parking spaces and extensions to bungalow to include forming first floor level on Foxholes Road in Bournemouth, with the plans drawn by Robert Nabney of Now Architecture.

The appeal site is located on a prominent plot and is occupied by a detached bungalow which was originally built as a club house and has little architectural merit.

The planning application was refused as the Council considered the amount of demolition and re-build proposed was tantamount to a new dwelling and would therefore result in the loss of a small family dwellinghouse, in conflict with local Policy CS19. Furthermore, the LPA considered the proposal would fail to make provision for future highway improvements.

As part of our appeal we prepared a comprehensive appeal statement setting out our justification for the scheme, that the proposal was only 5 sqm above the threshold for small family dwellinghouses and that the scheme would not impact upon future highway improvements.

The Inspector agreed that there was no compelling evidence the proposal would prejudice the ability to achieve future highway improvements. Furthermore, the Inspector agreed with our argument that the proposed dwelling would only be marginally above 140sq.m and as such would remain modest in size. Also, the proposed extensions and alterations were considered by the Inspector to represent a significant improvement compared to the existing scheme. Overall, these benefits were considered to outweigh the minor conflict with Policy CS19.

The client was delighted with the appeal win. If you have recently received a refusal and would like to know whether it is worth appealing then why not call Pure Town Planning on 01202 585524 or email info@puretownplanning.co.uk to see how we can help you.