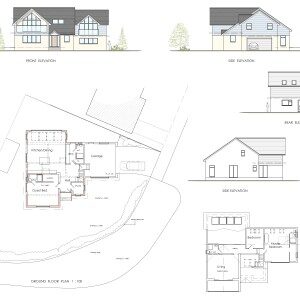 BCP Council (Bournemouth):  Darryl Howells is pleased to announce the winning of an appeal against the refusal  of a scheme for extensions to the front and rear of a bungalow, creation of a new roof and formation of habitable accommodation within – or in other words conversion from a bungalow to a chalet bungalow.  The scheme was originally designed and submitted by Andy Brown of A B Design Architectural Services but the scheme was met with resistance by the planning officers.  Following the refusal, Mr Brown recommended Darryl to his clients to run an appeal to overturn the outcome.

In Darryl’s appeal submission he argued that the street scene comprised various development forms of housing and there was not one style that defined the street scene. This argument was accepted by the Inspector. The LPA had refused the scheme on the grounds that the proposal represented a dispropionate-sized development compared to the existing modest bungalow.  In the Inspector’s decision, it was concluded that it “would not appear incongruous or out of keeping with others in the area”.  The Inspector indicated that in this location, the appeal site “is capable of accommodating a dwelling of this size and the scale of the property would be in keeping with the property’s prominent location on a corner plot which emphasises the visual “end” to the road as it turns a sharp corner”.

To conclude the issue of impact upon the character and appearance of the area, the Inspector felt it necessary to respond to the Council’s Residential Extensions: A Design Guide for Householders Supplementary Planning Document, September 2008 (SPG) as the planning officer had sustained many of his arguments against the scheme on that document.  The Inspector said “the SPG advises that the bulk and mass of an extension should be smaller than the existing building. However, the SPG is guidance and I consider that the proposal would not conflict with its aim of preventing bulky additions which dominate and, consequently, adversely affect the character and appearance of the host dwelling”.

The second reason for refusal was alleged overlooking and dominance of the extensions to the neighbouring occupiers.  Here the Inspector accepted Darryl’s arguments and evidence again, and concluded no material harm due to height, orientation and prevailing pattern of sloping roofs evident within the immediate area.  Again the Inspector referred to the Council’s Residential Extensions SPG but reminded all parties that document is guidance only and not adopted policy.

If you want to develop or extend your home and are finding resistance from the Local Planning Authority then get in touch with one of the Pure Town Planning consultants to find out how we might be able to assist.