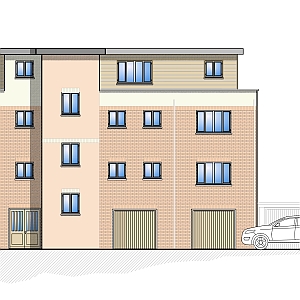 BCP Council (former Borough of Poole): Matt Annen, director of Pure Town Planning is once again delighted to announce that we have won yet another planning appeal against BCP Council resulting in the grant of planning permission for 8 flats in the Canford Heath area of Poole.

The approved scheme, designed by The Plan Partnership for our mutual client Bournemouth and Poole Estates involved the demolition of an existing garage and the erection of a four storey building with 5 integral garages and 8 flats above.

The scheme was originally turned down by the then Borough of Poole Council for the sole reason of the effect of the development on the character and appearance of the area (including the effect to the adjacent playground). The Inspector, in his decision notice deemed that “The four storey building as proposed would be taller than most in the area, although the buildings that surround Adastral Square are of a comparable height with pitched roofs. In my opinion, the proposed flats would not appear overly dominant or prominent adjacent to these existing buildings, with the height differences not being significant in this context”…

The Inspector concluded that “Overall, I regard the design and scale of the proposed flats as being appropriate and would not be a form of overdevelopment. It would therefore have no harm to the character and appearance of the area or have a negative visual impact. The proposal also would have no significant detrimental effect to the future enjoyment of the adjacent playground area”. He subsequently allowed the appeal.

If you have recently had a planning application turned down why not speak to Pure Town Planning to find out your chances of success by challenging the decision at appeal?