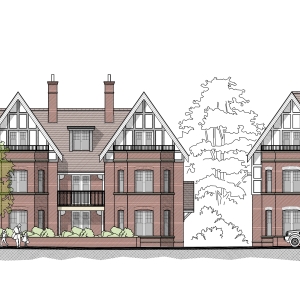 The appeal followed a refused scheme to demolish 2 houses and erect a block of 8 two-bedroom flats and block of 11 two-bedroom flats with parking, cycle and bin storage in May 2018. This application was refused by Bournemouth Borough Council (as it was then) on grounds of being out of keeping with the existing character by reason of scale, design and layout as well as harmful impact to amenity of neighbouring properties and unacceptable living conditions for future occupants.

The scheme was designed by Anders Roberts Cheer for mutual client AJ Developments, who instructed Pure Town Planning to challenge the decision at appeal. The Inspector assessed the evidence and supporting reports and concluded in regard to the primary concern of the effect of the proposed development on the character and appearance of the area that:

“my finding on this main issue is that the proposed development would not have an adverse effect on the character and appearance of the area, and would not adversely affect the setting of the West Cliff and Poole Hill Conservation Area, or harm its significance. The scheme would represent high quality design, in terms of its scale and layout, in accordance with CS Policy CS41, that would protect the setting of the CA as required by CS Policy CS39. It would also comply with LP Policy 6.10 that requires, amongst other things, that flats development will respect and enhance the character and appearance of the area”.

On the subject of amenity, the Inspector deemed that: “I find that the submissions show that there would be an appropriate degree of separation between No 3 and the nearest block. This would allow for the erection of a building of a form that would not affect the living conditions of the occupants of No 3 by reason of outlook. I also find that the scheme would not result in an undue loss of privacy to the occupants of No 8. Therefore, the proposal would accord with those terms of CS Policy CS41 and LP Policy 6.10 that require, amongst other things, that proposals respect and protect the living conditions of neighbouring residents”.

Subsequently the Inspector allowed the appeal. The clients were naturally ecstatic to hear the good news, which brings a satisfying conclusion following a couple of applications and challenges to secure the all-important planning permission. If you have recently had planning permission refused and are considering what to do next, why not contact Pure Town Planning on 01202 585524 or email us at info@puretownplanning.co.uk  for an assessment of your chances of success on appeal.