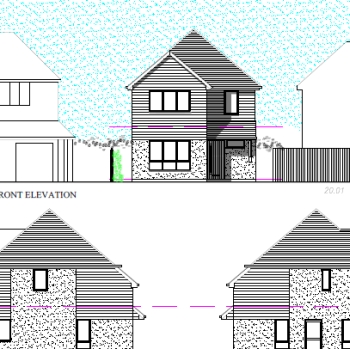 Borough of Poole: Pure Town Planning are celebrating another successful outcome with an appeal allowed on a site at Upton near Poole, Dorset.

The application site was the end of a garden which had road frontage to the street behind. Our developer client proposed to remove the six foot rear timber fence and erect a detached two storey dwelling with parking in front. The Borough of Poole planning officers decided that the plot was too small and thus the proposal would not respect the character of the street scene. Thus the application was turned down. The developer then approached Pure Town Planning to lodge a planning appeal against the decision.

We were successfully able to persuade the Inspector to take a more pragmatic approach to the character of the area. He found that the site as existing formed the first of several which “present an unattractive and utilitarian high, unbroken, close-boarded back garden fence line to the road.” He placed significant weight on the opportunity which the proposal presented to ” to open up part of the existing unappealing frontage of this part of Sandy Lane and visually enhance the street scene and thereby the character and appearance of the wider area.” As the Inspector concluded that the proposal would enhance the character of the area, he allowed the appeal and granted planning permission.

If you have recently had planning permission refused and are considering what to do next, why not contact Pure Town Planning for an assessment of your chances of success on appeal.