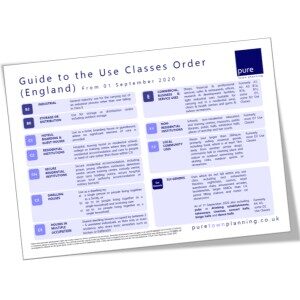 An update to the Use Classes Order in England has come into effect as of 1st September 2020, bringing significant changes to several of the existing use classes.

In addition to this, new Use Classes F.1 and F.2 have been created which incorporate learning and non-residential institutions and local community uses. Use Class F.1 includes schools, non-residential education and training centres, museums, public libraries, public halls, exhibition halls, places of worship and law courts. Use Class F.2 incorporates shops (not larger than 280sq.m. primarily selling essential goods, including food, which is at least 1km away from another similar shop) (previously A1), community hall/meeting place (previously D2) and indoor/outdoor swimming baths, skating rinks, outdoor sports or recreations not involving motorised vehicles or firearms (previously D2).

Furthermore, a number of uses have now been excluded from a use class (known as Sui Generis), meaning they have no permitted development rights and planning permission is always required for any change of use. These include pubs or drinking establishments (previously A4), takeaways (previously A5), and cinemas, concert halls, bingo halls and dance halls (previously D2).

Pure Town Planning have updated our handy guide to the use classes order which may be found here.

If you have a site or premises that might be affected by these changes then please get in touch at info@puretownplanning.co.uk or via the office line on 01202 585524 and one of the team would be happy to advise.