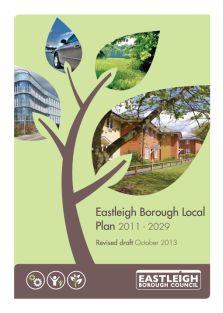 The timetable at this stage is vague – sensibly so as the initial reading of the plan by an Inspector prior to examination is often the crunch time which all too often can result in delay it before it even gets going. If things go well then hearings could be in autumn leading to possible adoption in spring next year.

Meanwhile Eastleigh presses on with introducing the Community Infrastructure Levy (£75 per sqm for residential) and with a fair wind may get it sorted before the cut off day of April next year. At this stage there are plenty of authorities who will fail to introduce CIL in time – presumably they are gambling that the Government will (as before) extend the date. As it stands after April 2015 Councils will no longer be able to charge standardised Section 106 contributions (except for affordable housing). The noises from Government are that this time there will be no extension but the latest research reported today estimates that 68% of local authorities in England and Wales will not have CIL in place by then. And that is a lot of Councils missing out on a lot of funds…

As ever if you have any queries on the ever changing world of planning policy then do please get in touch.