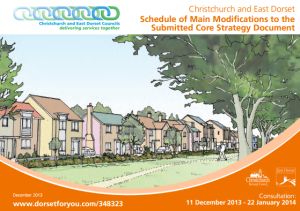 East Dorset District Council and Christchurch Borough Council: I noticed that yesterday someone landed on our website having searched “when will East Dorset core strategy be adopted”. Well it’s a good question and a timely reminder for me to provide an update on the subject. For a number of developers it is notable when these two Council’s adopt their forthcoming joint Core Strategy as this will herald a significant shift in affordable housing policy in both Council areas. At present small open market residential schemes (under 15 units) are not required to contribute towards affordable housing provision. The new Core Strategy policy as currently written when adopted will require all sites providing a net increase in housing units to contribute towards affordable housing (at a rate of 50% for greenfield sites and 40% for those deemed previously developed).

The latest information I have from the planners at the Council is that they envisage adopting the Core Strategy in late April 2014. The document has recently gone through the examination process and the Councils have just launched a consultation on a series of modifications arising from that. For those interested the Consultation documents are available here and it runs from today (11 December 2013) until 22 January 2014. The responses of that consultation will be forwarded to the Inspector who then will issue a report recommending whether the proposed document (as amended) is sound and may be adopted by the Councils.

Late April next year may seem a way off however to get applications in and through the system before then will require action either now or very promptly in the new year.

In the meantime we press the Council officers for details as to how they propose to roll in the policy change (for example will it be applied to everything still in the system at that date or will it only be applied to applications registered after it).

If you have any queries as to how this policy change might affect you then do get in touch.

Just as a footnote to this story, we raised an eyebrow last week when it was announced as part of the Autumn Statement that: “The government will consult on a new 10 unit threshold for section 106 affordable housing contributions to reduce costs for smaller builders.” Don’t hold your breath – this Government has consulted on a number of measures which were quietly dropped – but it is interesting to note how quickly policy ebbs and flows sometimes.